Written by Administrator on 25 September 2020. Posted in Club News

A reminder that Wick Academy membership fees for existing members are due by 30th September 2020.

In light of current circumstances we would like to ask members to pay by bank transfer where possible.

For those who are unable to pay by bank transfer there will be someone available at Harmsworth Park on Monday, Wednesday and Friday from11am until 1pm to take your payment.  Please remember to wear your mask and follow all social distancing rules. Alternatively please put payment in an envelope with your name and address and put through the letter-box at the boardroom at Harmsworth Park.

Written by Administrator on 30 August 2020. Posted in Club News

The SHFL League Management Committee met on Saturday the 29th August and decided the following structure for season 2020-2021:
•  The League Championship will be based on a single fixture between each club so that each club has 8 home and 8 away fixtures.
•  The League Championship will start, subject to government approval, on Saturday 17th October 2020.
•  The 2019-2020 Utilita Highland League Cup will be completed by late November 2020.
•  The Highland League Cup format will change to one using group stages and will take place during early 2020-2021.

There has also been a change in guidance regarding first team training which can now commence again. We have some documentation to put in place but the intention is that the first team will return to training on Saturday the 5th September.

Written by Administrator on 14 August 2020. Posted in Club News

Many thanks to everyone that donated to the Wick Academy Charity Challenge. A fantastic total of £1,160 has been raised. The money will be divided equally between the club and its chosen charity, Caithness Rural Transport.

The boys now have a target of 1,160 km to cover over this Friday, Saturday and Sunday. The players and management can run, cycle or walk in their own time with the aim of reaching the target by Sunday night. Everything will be logged on a Strava app which will enable progress to be tracked as the hours go by.

Gary Manson said: “I’ve spoken to all the boys and they’re looking forward to the challenge.”

He says he is pleased to be supporting an organisation that provides an important county-wide service.

“We are quite a Caithness-wide squad, covering nearly every corner of the county,” Manson pointed out. “Caithness Rural Transport does a great job for the el­derly and disabled so I think it’s a very worthwhile cause.” 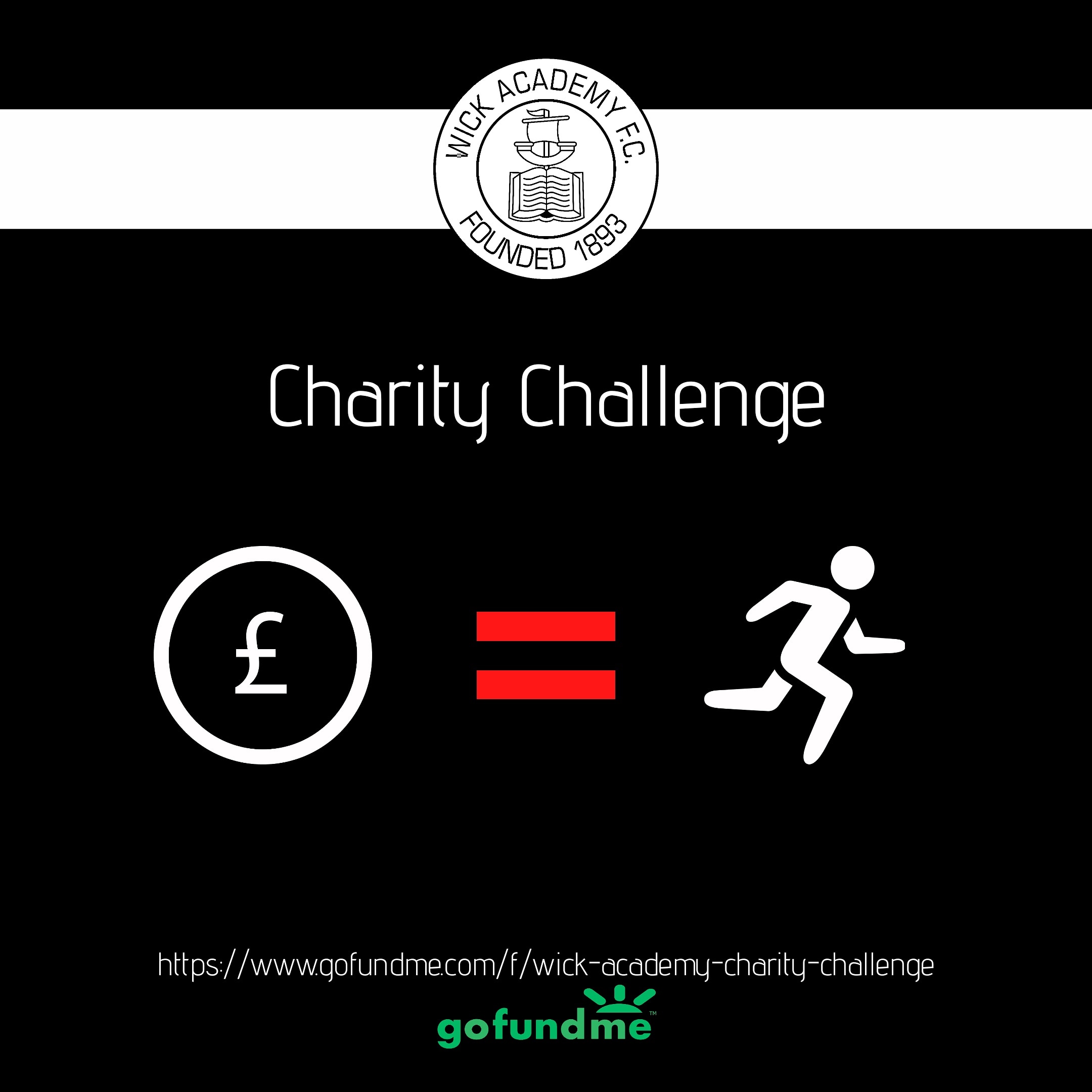 Written by Administrator on 06 August 2020. Posted in Club News

The club have been thinking of a way to not only raise some much needed funds for the club, but to also help out a local charity and to keep the players active. We think we've come up with a suitable fitness challenge which covers these aims.

The challenge is, how ever much money in pounds is raised from a Go Fund Me page that has been set up, the first team squad have to cover the same amount or more in kilometres. They will have 3 days to complete the challenge starting on Friday 14th of August.

So for example, if the page manages to raise £1000 then the squad will have to run, walk or cycle 1000km between them over the 3 days. This could hopefully prove extremely challenging for the boys should we raise a substantial amount.

The Go Fund Me page will close on Thursday 13th August at 8:00pm, if you are able to donate then great but if not, you could help out by spreading the word. Anything would be really appreciated.

Written by Administrator on 10 July 2020. Posted in Club News

Wick Academy are delighted to announce that Gary Manson has been appointed as the club’s new first team manager on a long-term deal.

Having been installed as interim co-manager alongside Stewart Ross in February, Gary now takes sole charge of the club ahead of the new season. It is still unclear when football be allowed to restart due to the global pandemic we are currently facing, but hopefully it’s not too far away. 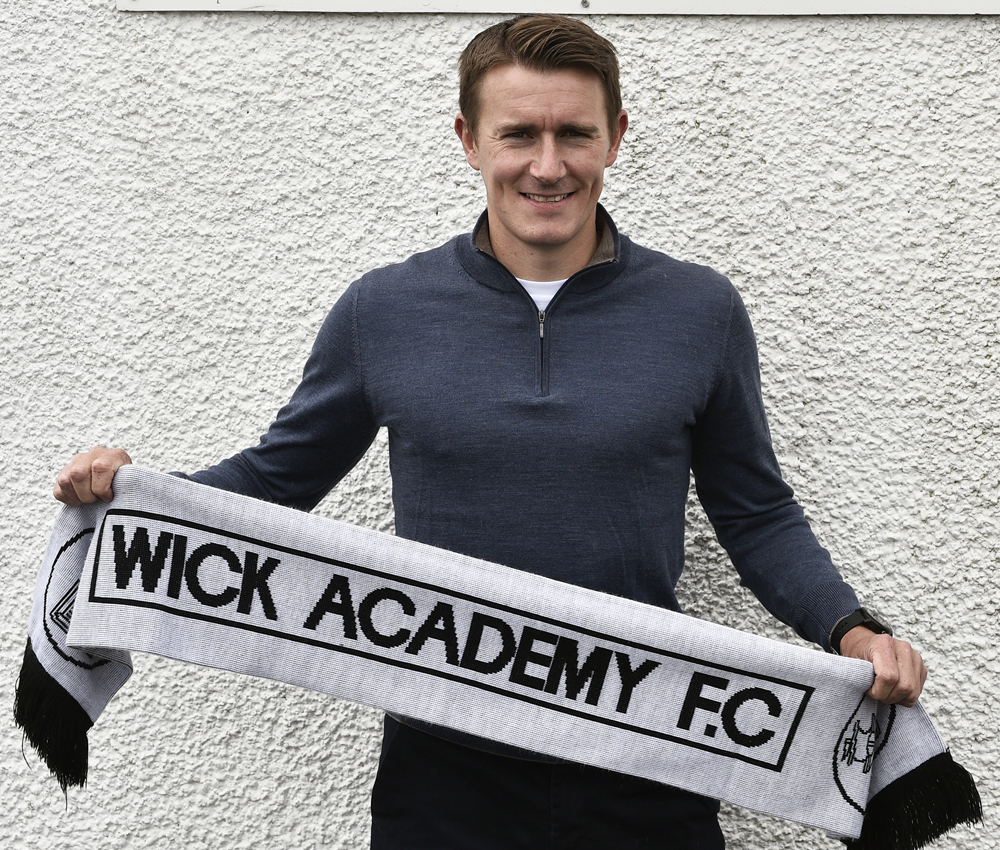 Gary (36), who will continue to be registered as a player, is excited to be taking his first steps into management after enjoying a 20-year playing career with the club so far. He’s thoroughly looking forward to the challenge of improving the clubs fortunes on the pitch, the new manager had this to say, “I’m delighted to be announced as the manager of Wick Academy FC, a club I know inside out and one that obviously means an awful lot to me. It’s a strange time that we find ourselves in at the moment but I’m raring to go and can’t wait to get started once it is deemed safe to do so.”

He added, “I’m really excited to see what the future holds for the club as when I look at the squad, I see a tremendous blend of youth, experience and ability. Everything is there for me to work with, the squad just needs a bit more belief, structure and guidance given to it. If I can add those ingredients, then we can go on and achieve great things together.”

Gary has already identified his backroom staff and the club hope to be in a position to announce those additions in the near future.

Club chairman Pat Miller said: “Gary has had a long and outstanding footballing career. I'm delighted he has accepted the post of Wick Academy manager and I look forward to a new period in the club's history.

“It hasn't been the easiest of times for Gary with the suspension of football due to the Covid-19 crisis but he has quietly been working below the radar, keeping in touch with the squad and also assisting me in helping tie up the players coming out of contract this year.

“I'd like to wish Gary a long and successful spell with Wick Academy and we hope for lots more silverware in the future.”