James Happy To Go The Distance

Written by John Briskham on 01 October 2013. Posted in Club News

James happy to go the distance for Academy 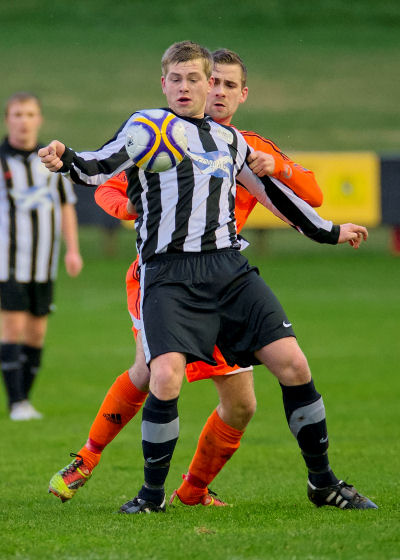 [Wick Academy's Orcadian midfielder James Pickles has a demanding travel schedule, but he takes it all in his stride as he continues to make his mark in the Highland League. He spoke to Alan Hendry]

Long journeys are an unavoidable aspect of playing for Wick Academy - but the travelling commitments undertaken by James Pickles are exceptional by any standards. The 22-year-old makes the trip every weekend from Orkney, catching the ferry on a Saturday morning and returning that evening when there's a home game but spending fully two days away when the Scorries are on the road. Not that he has any complaints about those frequent crossings of the Pentland Firth. James is thrilled to have been given the chance to establish himself at Highland League level and is determined to play his full part in Academy's quest for silverware under Barry Wilson.
James has become an increasingly valuable member of the squad since arriving in 2012 from Rendall, of Orkney Amateur Football Association's A" League. He has produced consistently assured performances in midfield and shown his ability to shoot from distance to great effect - as witnessed with his stunning strike in the recent 1-1 draw with Cove Rangers.
His versatility and workrate are key strengths - along with a willingness to follow tactical instructions to the letter: "If I get told to sit, I'll sit. If I get told to go, I'll go. If I get told to do both, I'll do both."
James was recruited by Academy after he impressed while playing for an Orkney AFA select in a friendly at Harmsworth Park in July last year. "From what I've heard, I think they'd been watching me anyway. After that Orkney game it all came about then and I got a phone call," he says.
James had been playing for Rendall since making his debut for the club as a 14-year-old and he admits it took a little time to adjust to the pace of the Highland League. "It was unbelievable how much of a difference there was. It's so quick, you've got to make your decision before you get the ball."
Nevertheless he proved a real asset as season 2012/13 progressed and the Scorries closed in on an unprecedented 17 home league wins and a club record of 101 league goals, ending up third in the table.
"It was really good," he says of that outstanding 100 per cent run. "It just gives you that extra thing to play for. Every single game mattered, which is exactly what you want."
James is convinced the club is equipped for success, underpinned by a tremendous team spirit. "It's a great squad and there's a lot of players who can adapt to different positions," he says. "It's a bit like the club that I left. Everyone is friends, they just happen to play football together. Academy is exactly the same, it's a good bunch of friends who all happen to play for the same team."
He speaks highly of manager Wilson: "His man-management and speaking to you is brilliant. He tells you exactly what he wants.
"The impact James has made at Harmsworth Park has helped raise the profile of Academy, and the Highland League in general, amongst Orkney football followers. "I'm certainly getting asked a lot of questions about it by a lot of people," he says.
James is enthusiastic about the formation of Orkney FC, a new club that is entering North Caledonian cup competitions. He sees it as a positive way to develop young players from the islands.
Academy's own Orkney connection is growing as James's younger brother John has now signed for the club. James continues to train with Rendall and Orkney FC, as well as doing some running to maintain his fitness during the week.
Looking back on his first full year as an Academy player, James says: "I never imagined it could have gone so well, to be honest, especially that first season. I was just looking to be involved in any kind of way, and anything after that was a bonus."
James's first Academy goal was a long-range strike in the 3-0 victory over Brora Rangers in last season's North of Scotland Cup semi-final. That, he says, has been the highlight of his time at Wick to date. He adds: "I was hoping for the North of Scotland Cup this year after we got so far last season, but unfortunately it wasn't to be."
Having signed a new contract that will keep him at Academy until at least 2015, James is happy to continue making those long trips. When the Scorries have an away fixture, James - a joiner who thankfully has an understanding boss - will leave work shortly after 3pm on the Friday in order to catch the early-evening ferry to Gills, where he is collected by Academy committee man Jim McLachlan. After overnight stays before and after the match, it's around 11am on the Sunday before James is back home.
"It's just what you've got to do, I suppose," he says in typically level-headed fashion. "My boss is pretty good about time off work, which is good because we're absolutely flat out at the moment. I just take a few hours off here and there and try and work it back when I can."
Not that James would either want or expect preferential treatment from Academy on the basis of his travelling schedule. He says: "I want Barry to pick me for my football, not for the fact that I've gone all this distance, because at the end of the day it doesn't really bother me how far I travel."