Written by John Briskham on 28 January 2014. Posted in Club News 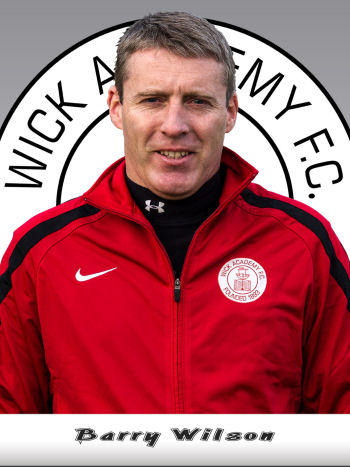 Yesterday Wick Academy FC gave permission to Elgin City FC to discuss the vacant Manager's post at Borough Briggs with Barry Wilson. Elgin have confirmed that they have now appointed Barry into this position.

Barry has been the Manager at Wick Academy since October 2012. We are very sad to see him leave, but also delighted that he has been presented with this opportunity to manage at a higher level. We would like to thank him for his contribution to the Club for the period that he was in charge. Both the players and management committee have learned a lot from the experiences that he has shared with us. Some close friendships with Barry and his family have been forged and they will always be welcome back at Harmsworth Park.

We would like to thank both Elgin City and Barry for the way in which they both handled the situation and we wish them all the very best for the future.

These events have obviously happened at some pace and Wick Academy's focus is now on finding a replacement Manager. Further information on this will be issued in due course.