Written by John Briskham on 11 February 2014. Posted in Club News 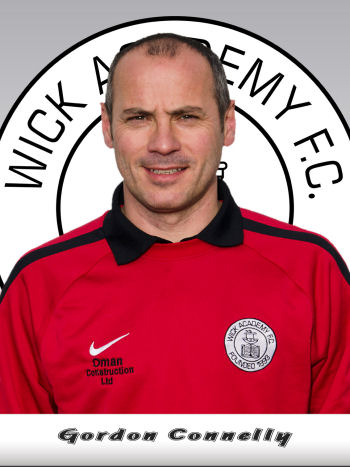 is pleased to announce the appointment of Gordon Connelly as the new Manager of Wick Academy FC. Gordon will take charge of the senior team with immediate effect with Richard Hughes (Tichie) as his assistant Manager.

The Club offered the position of Co Manager to Tichie and Gordon; however Tichie intimated to the Club that he would prefer to remain in his current role as assistant Manager.

After Gordon had a spell at English club Burnley FC; he joined Jim Leishman's golden era at Dunfermline which saw them rise through the divisions to reach the Scottish Premier League before Bobby Wilson took him North to Ross County where he spent 11 seasons helping County rise from Highland league Minnows, to Scottish League football in 1994.  He played over 300 games for County and scored over 100 goals from midfield and then in 1993 he was enrolled into the Ross County Hall of Fame.

In August 1997 he joined Wick Academy as a player where he made 28 league appearances before moving on to Forres Mechanics, first as a player and then as player manger, winning 3 HF League Cups in succession during seasons; 1999, 2000 and 2001 before illness took him away from the game for a period of time. He did however return to play for several further HFL clubs before he joined Derek Adam's Ross County backroom staff during their rise to the SPL.

Gordon returned to Wick Academy FC during the 2012-13 Season to become a member of Barry Wilson's background staff.

Ross started his football career as an apprentice at Ross County FC in 2008 playing for the Under 19 Squad before injury forced him out of football for a spell in May 2010. He returned to football in the SHFL for a short spell with Brora Rangers until he sustained a bad knee injury which ended his football career. None the less this didn't deter Ross and he decided to become a football coach undertaking various SFA coaching badges at various levels and this led him to becoming a part-time coach in Aug 2010 working with Ross County FC, Scottish Football Association and Wick Academy FC.

In April 2012 Ross moved to the Massachusetts in USA after successfully applying to become the Mass Premier Soccer (MPS) School of Excellence Director (SOE) where he successfully guided two of their youth teams into 1st place in their respective soccer leagues.

He returned home to Scotland in November 2012 at the end of the Soccer Season and was once again offered part time coaching positions working for the SFA, Ross County FC and Wick Academy FC as well as helping Halkirk United in the North Reserve League.

Ross is currently working towards his UEFA B licence and hopes to add that to his already impressive Coaching CV.