Written by John Briskham on 26 January 2007. Posted in Club News

A Farewell message from Peter 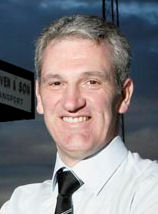 I would like to take this opportunity to thank everyone involved with Wick Academy F.C. All of you have shown me tremendous support and friendship during my time as manager. Thank you also to those involved in the organisation of the all weather pitch which has undoubtedly helped to develop the players technically and tactically. I would also like to express my thanks to the supporters who have been loyal and an extra thanks to those supporters who made the trip to Brora for the derby game. Hope you weren’t suffering too much on Sunday.

The players have been a credit to both themselves in the manner they have approached training and games having the desire to improve individually and collectively and their desire to improve has been evident. All the coaching staff at U19’s, GK coaches and first team coaches have worked tirelessly in their efforts. Thank you for all your hard and very valued work.

This brings me on to Titchie and Zeeky, or is it Zeeky and Titchie. I am grateful and privileged to have had them working alongside me and I am delighted to see them taking over the reigns at Wick Academy F.C.

I wish you all the very best for the future.