Written by John Briskham on 14 October 2007. Posted in Club News

Wick Academy were delighted to have a group of young footballers from Thurso Swifts FC as guests for the Scottish cup game against Deveronvale. Representing Thurso Swifts were 8 players from their successful Under 11 team along with their coach Alan Murray himself a former Academy star. It is hoped that over the season players from all the youth teams in the county will visit the Harmsworth with Canisbay the next visitors for the home game against Rothes on the 20th of October.

As part of their day the youngsters were put through their paces by the Academy co-manager Ian Munro before continuing going through some routines led by their own coach. Watching the players it was easy to see why a number of them have already caught the interest of Caley Thistle's youth set up. One of the Swifts players (Sean Campbell) was then drawn to act as the match mascot before joining the rest of his team to watch the game.

Wick Academy chairman Colin Stewart said " As the senior club in the county we feel it is long overdue that the club took a more active involvement in the community and there is no better place to start than with the young footballers in the county who will hopefully aspire to play Highland League football with Academy and possibly go onto bigger things like Craig Gunn and Shane Sutherland have done in recent years. After watching the youngsters from Swifts today it looks like the future of Caithness football is healthy.

Caithness United U15's already play under the Wick Academy banner in the Highland Youth League and in addition the clubs are in the process of arranging for the youth team to provide ball boys For Wick Academy's home games at the Harmsworth. 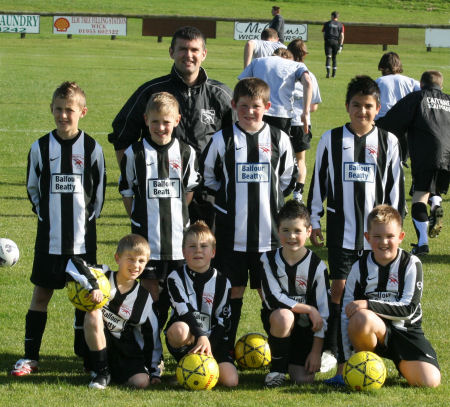