Written by John Briskham on 30 July 2007. Posted in Scoop Numbers

Wick Academy are delighted to announce the launch of their very own weekly draw ticket which will be known as the ‘Scorries Scoop’. 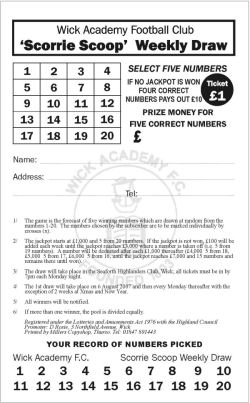 The ticket, which will cost £1, is based on the forecasting of 5 numbers which will be drawn at random from numbers 1 to 20. The jackpot will start at £1,000 and if not won will increase by £100 per week. If the jackpot reaches £3,000 a number will be taken off. A further number will continue to be deducted after each £1,000 thereafter until the jackpot reaches its maximum ceiling of £7,000. The draw will continue to be made until the jackpot is won, and the prize will then return to £1,000 and will follow the same process again.

In any given week if the jackpot is not won, a prize of £10 will be rewarded to anyone who correctly matches 4 numbers. If there is more than one jackpot winner in any given week the prize pool will be divided equally, and all winners will be notified.

The first draw will take place in the Seaforth Highlanders Club on the 6th of August 2007 at 7:00pm, and weekly on a Monday night thereafter, with the exception of Christmas and New Year weeks.

There will be collection points around the town and they are as follows:

Tickets will be available for sale from any committee member and also at all of the above collection points with the exception of The Shop in Girnigoe street.

If you would be able to assist in selling any tickets please contact any of the committee members.