Written by John Briskham on 05 May 2012. Posted in Match Reports

A pretty flat first half, but three second half goals earned Academy a 3-0 win over Lossiemouth and keeps alive our chances of qualifying for next year's SFA Challenge Cup. Other results went in our favour today when Keith, who we are battling for that Cup position, were beat 4-1 by Clachnacuddin. The three points today guarantees Academy at least ninth spot in the table.

The win today extends our unbeaten league home run to 10 games, a club record. Only Deveronvale and Fraserburgh have managed wins against us in the league this season at the Harmsworth Park.

It took Academy 61 minutes to break the deadlock when Sam Mackay slammed home the opener. Stewart Ross chipped in for his first league goal of the season 6 minutes later, and Richard Macadie put the icing on the cake with the third in the last kick of the game.

The strike from Stewart Ross was a landmark for Academy, as it was out 800th league goal.

It took 16 minutes before Academy penetrated the Lossie back line. Ross Allan had a lung busting run up the left flank and was body-checked at the edge of the box by John Urquhart. Sam Mackay took the free kick and the ball flashed across the face of goal with McConnachie getting a hand on it to turn it wide round the left hand post.

Just before the half hour mark Mackay worked the ball into the box and he slid it to Weir who snapped off a first time shot but Finlay Stables got his foot in to make a good block.

Macadie was the next to try his hand as he was fed in by Cunningham but he sliced his shot wide of target.

A ball over the top sent Davie Allan in on goal but he forced his shot straight at keeper Darren McConnachie.

Academy had a great move that almost resulted in the opener. Weir collected the ball with back to goal and held off his man before sliding the ball into the feet of Davie Allan and he smoked a screamer just over the top of the Lossie cross-bar.

3 minutes before the half-time break Davie Allan passed up a fantastic chance for the opener. Mackay slipped the ball into Davie Allan and 6 yards from goal he had time to pick his spot but he skied his shot straight up into the air.

1 minute later Weir dummied the ball and let it run to Mackay and in exactly the same spot as Allan in the attempt before he also fluffed his lines as his shot screwed yards wide of the target.

In the last action of the half Craig Shearer took a sore-one when he was elbowed in the face whilst challenging for the ball and was lead off the park as the half-time whistle was sounded.

Shearer was unable to continue after the break and he was replaced by Gary Manson.

In the 58th minute Macadie burst down the right flank and hit the byline before cutting it across goal to Weir who swiveled on the ball and fired in a first time shot but keeper McConachien got a hand to the ball and turned it around the post.

3 minutes later Academy broke the dead-lock. Weir slid a reverse-pass to Mackay and he beat his marker on he left hand side of the Lossie penalty area, took a touch and belted the ball past McConnachie into the top right hand corner via the intersection of cross-bar and post.

With 67 minutes on the clock Academy launched another attack and Weir had an effort that looked to be going wide of target but it ran to the feet of Stewart Ross and he stuck it home from 4 yards out at the back-post.

Lossie didn't have many goal scoring opportunities but in the 77th minute substitute David Farquhar found some space in the Academy box  but he sent his effort over the top of target when he should have really worked James More.

Academy looked as if they were going to go another goal to the good when Davie Alan broke through on goal but with only the keeper to beat he sent his shot just wide of the right hand post.

Weir was next to pass-up another great chance but he also shot wide of target.

In the last kick of the game Academy went three up. Manson made ground up the left before passing to Mackay who drove the ball across goal from a tight angle and the ball nicked the post before falling to Macadie and he converted from 10 yards out. 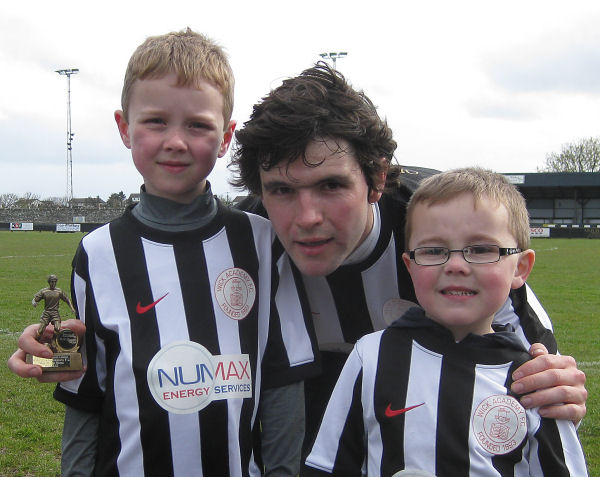