Written by John Briskham on 22 September 2012. Posted in Match Reports

Academy secured a fine 4-1 win over today's visitors Fraserburgh to extend our unbeaten home run in the league to 15 matches. Fraserburgh being the last team to beat us in the League back in October 2011. Seven of the top eight sides won their games today, so Academy remain in 4th spot. With seven games played this is by far Academy's best start to a season.  Our previous best start with seven games played had been a 10 point total which we previously achieved in seasons; 98-99, 00-01, 09-10 and 11-12.

Gary Manson got the Scorries off to the perfect start when he chipped keeper Paul Leask in the 29th minute. Gary Weir doubled the advantage seven minutes later to put Academy into the half-time break two goals to the good. Scott Barbour pulled one back for the visitors with 25 minutes of the second half played, but Bryan Hay picked up his second booking of the game a minute later to reduce the visitors to 10 men. Substitute James Pickles then put the game beyond doubt 3 minutes from time and Richard Macadie rounded off a fine display as he chipped home the 4th a minute into injury time.

A minutes silence was observed before kick-off in respect of Jimmy Rosie who was the Harmsworth Park caretaker for many years.

Academy started the game kicking down the Harmsworth slope and we quick out of their blocks. In the opening minute Gary Manson swung a free-kick into the Forres box. Gary Weir got his head to the ball and it bounced off the base of the post but the Academy front-man was flagged off-side.

Scott Fowlie had Fraserburgh's first attempt on target with a right foot shot from the edge of the box but Michael Gray got down well and held the ball.

12 minutes into the game Davie Allan broke through the middle of the Broch back-line and looked to be taken out from behind. The Academy cries for a foul were waved away by referee Billy Baxter.

Gary Weir was booked seconds later for a tackle on Scott Fowlie. He hobbled off injured but made it back onto the park a few minutes later.

Academy were having the better of the first half exchanges playing quick attractive football and with 23 minutes played Richard Macadie had a crack at goal which just flew inches over Paul Leask's  cross-bar.

That was followed by Michael Steven shaving the outside of the wood-work from a Sam Mackay free-kick.

Just in the half hour the Academy pressure paid off. Weir slipped Gary Manson down the left hand channel. Manson looked up and spotted Leask off his line and from 35 yards out Manson chipped the ball over Leask and into the corner of the net.

Minutes later Zander Davidson got a shot on target that looked as if it was going to creep over the line but Grant Steven covered back and cleared the danger.

The Fraserburgh defence were pulled apart in the next Academy attack. Sam Mackay got in behind them and cut the ball across goal. Weir got on the end of it but keeper Leask blocked his shot with his feet. The ball came back out and nicked off Bryan Hay, was swung back into the mix by Michael Steven to the back post for Weir who followed in and headed home via a nick off the inside of the post..

In the next Academy attack Mackay broke down the left flank and he crossed for Macadie who was unmarked in the middle of the box for a free header but he put his attempt over the cross-bar.

It was all Academy at this stage and 4 minutes from half-time Davie Allan again hit the burners and burst through the Broch defence and his shot flew inches past the outside of Leask's left hand post.

Allan then drove up the right flank and supplied a prefect cross for Weir who threw himself at the ball but he was inches away from making contact to turn it into the net.

Weir ended the half by scrapping for the ball at the edge of the Fraserburgh box . He did well to win it but skied his shot over the top of the target.

Scott Fowlie didn't make the start of the second half and he was replaced by Mark Cowie.

Fraserburgh started the second half with a bit more fire in their belly and with 8 minutes played they should have pulled a goal back. Slack defending by Academy let Marc Dickson in between Alan Farquhar and Gary Manson but he dragged his shot and it clipped the outside of Gray's  right hand post.

Bryan Hay picked up what was to end up a costly booking when he shoulder-charged Sam Mackay off the park as Mackay made a run up the left wing.

Academy had a shout for a penalty in the next attack when Weir looked to have been clearly pushed over in the Fraserburgh box but referee Baxter waved away the Academy protests.

Weir again had a chance but he smocked a David Allan cross over the Fraserburgh cross-bar.

Grant Steven then made a great defensive tackle to keep the visitors score to nil. Substitute Zak Conway broke into the Academy box and got around Gray.  As he looked to pull the trigger Steven made a double blocking tackle and cleared the danger.

Fraserburgh were having a good spell and got their reward 20 minutes from full-time.  Scott Barbour collected a long ball that was punted over the top of the Academy defence, made himself a yard and hammered home low past Gray from 10 yards out.

The visitors celebrations were short-lived as a minute later when they went down to 10 men. Bryan Hay fouled Davie Allan and referee Baxter flashed yellow before red and Hay was sent for an early bath.

Academy started to take advantage of the extra man and Davie Allan stormed to the edge of the penalty area before driving the ball across the face of goal but Fraserburgh  cleared their lines.

James Pickles came on for Stevie Cunningham, followed shortly after by Lukasz Geruzel for Gary Weir.

6 minutes from full time Academy pressured and won a corner. Macadie swung it to the back post where Geruzel outmuscled his defender but his powerful header shaved the outside of the post.

3 minutes from full-time Academy sealed the win. Macadie stole the ball in mid-field and flew up the right wing. He crossed for Geruzel who held the ball up before teeing up substitute Pickles and the young midfielder rifled the ball home for his first Academy league goal.

Academy put the icing on the cake a minute into injury time. Macadie was played into the box, drew keeper Leask a few feet forward before dinking the ball over his head with a ice-cool finish.

In the last kick of the game Macadie found himself in a repeat position from where he had scored seconds earlier. He tried the same attempt but this time didn't put enough height on the ball and Leask gathered it into his midriff.

With the bulk of the top teams all winning today Academy retained 4th position. We now have our trip to England next Saturday for the Scottish Cup 2nd round tie with Berwick Rangers. 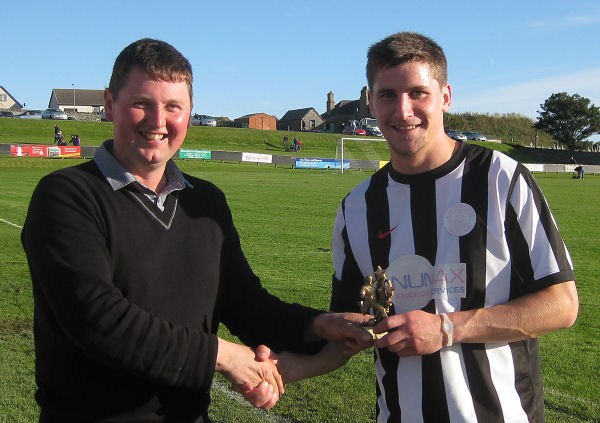