Written by John Briskham on 17 November 2012. Posted in Match Reports

Today's top of the table clash was a great game and Academy claimed all 3 points with a fine 3-1 win. Academy now have a 2 point lead at the top of the table with Cove Rangers and the remaining pack all tight on our heels. The amazing run of unbeaten league games at home continues and now moves onto 17 matches without defeat.

Richard Macadie opened the scoring with a fine strike in the 13th minute, and Gary Weir doubled the advantage 19 minutes later with a thunder strike that went in off the under-side of the cross bar. The visitors pressed really hard in the last 10 minutes of the first half and pulled a goal back 3 minutes before the break when Daniel Park headed home from close range.

Formartine battled away and played some really good football but in pressing for the equaliser were vulnerable to a counter-attack and Lukasz Geruzel, who had only been on the park 2 minutes, drove home with a powerful right foot shot with 16 minutes of the game left to play and secured the points for the Scorries.

Academy kicked off playing down the Harmsworth slope and for the first 10 minutes both teams cancelled each other out in mid-field.

Michael Gray was the first keeper to have his hands warmed when Calum Bagshaw found a yard on defender Alan Farquhar and got a shot on target that Gray palmed around the post for a corner.

Academy took the lead with their first real effort on goal. Gary Manson floated a free-kick into the Formartine box and keeper Andy Shearer came through a pack of players and punched the ball clear. It fell to Richard Macadie and he rifled a 25 yard right foot shot low into the bottom left hand corner of Shearer's net.

The visitors almost leveled when a Mark Smith effort from a Kevin Webster cross was blocked by Gray. Webster followed in and from a tight angle knocked his effort into the side netting via the outside of the post.

A minute later Formartine were forced into a change with Calum Bagshaw replaced by David Donald.

In the 23rd minute Academy had a good flowing move when Sam Mackay sent Davie Allan down the flank. He fired in a dangerous looking cross and Stuart Smith cleared for a corner. Richard Macadie sent in the corner and Michael Steven ran in unchallenged at the back post for a free header but he sent his attempt wide of the target.

Academy were creating the most chances at this stage of the game and Mackay delivered a square cross for Stevie Cunningham but Cunningham's shot went straight into the arms of keeper Shearer.

Formartine were looking nervous in defence as Academy continued to pressure for another goal. Davie Allan charged at them and flashed the ball across the face of goal but there was no takers to stick it home.

Just before the half hour Kevin Webster whipped in a free kick to the back post which was headed back across goal by Mark Smith. Academy managed to clear the ball after a bit of a melee in the box.

With 32 minutes played Academy doubled their advantage. Gary Weir picked the ball up from a Craig Shearer pass and smacked a thunder-bolt shot in off the underside of the cross bar and over the line.

The Formartine heads could have gone down, but fair play to them as they had a 10 minute spell where they threw the kitchen sink at the Academy goal. They made another change with Daniel Park coming on for the injured Calum Bagshaw. He was minutes on the park when he threw himself at a Hamish Munro cross in the middle of a packed Academy box and got enough on the ball to bundle it home from close range and take the visitors right back into the game.

In their next attack they forced a corner after a mad scramble in the Academy box. Michael Gray came to claim the corner kick but dropped the ball under pressure, but managed to fall on it to smother the danger before a Formartine player could react to the loose ball.

Referee Graham Elder blew to end first half proceedings and the fans headed for a cuppa with plenty first half incident and action to chew over.

Formartine came out fighting at the start of the second half and on the hour won a free kick right on the edge of the penalty box in a dangerous position. Craig McKeown took the free kick and hammered it low and hard. It took a flick off the end of the Academy wall and Gray got down well getting his body behind the ball for a good save.

Sam Mackay and Neil McVittie challenged for a 50-50 ball in front of the dug-outs and following a "bit of afters" by both players on the deck referee Elder flashed them both a yellow card.

Barry Wilson made a change on 72 minutes with Lukasz Geruzel coming on for Gary Weir.

Geruzel was a minute on the park before he got his head to a Davie Allan cross but he couldn't keep his header down and it went over the top of the cross-bar.

So a minute for Geruzel to create his first chance, and a minute later his name was on he score-sheet. Dave Allan broke from defence and worked the ball up-field. The ball was played into the Fomartine box and they half cleared the danger but the ball broke to Geruzel 16 yards from goal and he thrashed the skin off the ball powering home a right foot shot to restore a 2 goal lead.

Academy were now ticking and almost scored again with a great attacking move. Michael Steven played the ball up the channel to Geruzel who back-heeled it into the path of Richard Macadie. He took it in full stride and smoked a great shot millimeters over the Formartine cross-bar.

In the next attack Sam Mackay skinned his marker and fired the ball across goal. Geruzel and Macadie both pressured for the ball but Formartine scrambled it away.

Academy controlled the final 10 minutes keeping possession and running the ball to the corner flags and ran out deserving winners against a very good Formartine outfit. 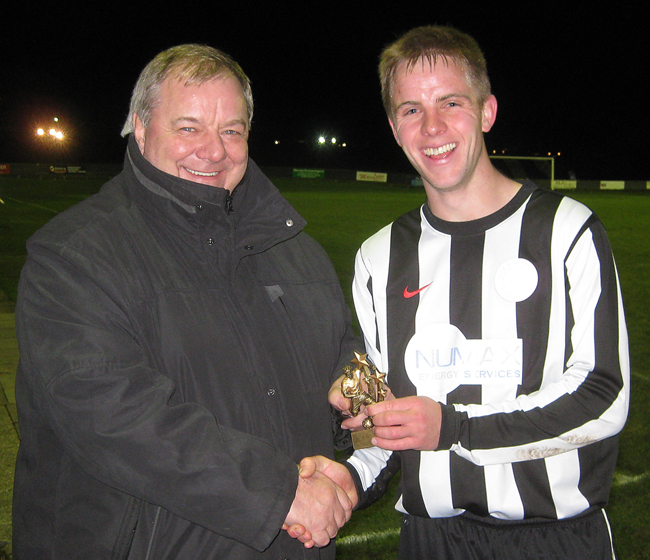