Written by John Briskham on 02 March 2013. Posted in Match Reports

Academy huffed and puffed their way to a 1-0 win today over Fort William. In a pretty flat game a 24th minute goal from Gary Weir was all that separated the sides at the full-time whistle. With neither Cove nor Formartine in League action today the win puts us 5 points clear at the top of the table.  Keith also managed to do us a favour today drawing 1-1 with Nairn County.

Academy kicked up-hill for the first half but it was Fort William that had the first chance with 6 minutes played. The ball was played up the right flank and Michael Gillespie broke into the Academy box and went one-on-one with James More, but More made a good block with his feet.

On 16 minutes Academy won a free-kick which was floated in by Ross Allan. Gary Weir got a header on target that looked goal-bound but Darren Quiqq cleared it off the line.

Academy pressed for the opener and Weir had a good give-and-go with Ross Allan on the edge of the Fort box. Allan got a shot on target that keeper Lyle Robertson got down to and he turned it round the post for a corner.

The opener came soon afterwards when Sam Mackay twisted and turned on the edge of the box, got a half-yard on his marker Ryan McDonald and floated a cross to the back post for the un-marked Gary Weir to nod home.

On the half-hour Academy should have increased their lead. Mackay played a pass to Geruzel who set up Pickles onto 7 yards out but his driven shot whistled just past the outside of Robertson's right hand post.

It took 11 minutes of the second half before either side looked close to increasing the scoring. Ross Allan played a long ball up-field for Sam Mackay who took it on his chest stepped into the box but from 18 yards he smoked his shot over the cross-bar.

In 64 minutes Barry Wilson swapped the Allan brothers with Davie coming on for younger brother Ross.

5 minutes later Geruzel had a shot that took a flick off a defender and looked as if it was going to trickle over into the goal but Darren Quiqq scrambled back and cleared it off the line.

With 10 minutes left to play manager Barry Wilson came on for Geruzel.

Clear-cut chances were few and far between but Academy had one more good chance to double their lead when Cunningham floated a long ball over the top for Davie Allan to collect and run into the box. Lewis Campbell tried to close him down but Allan got his shot off 8 yards from goal and it went straight into the arms of keeper Robertson, a yard either side would have burst the net. 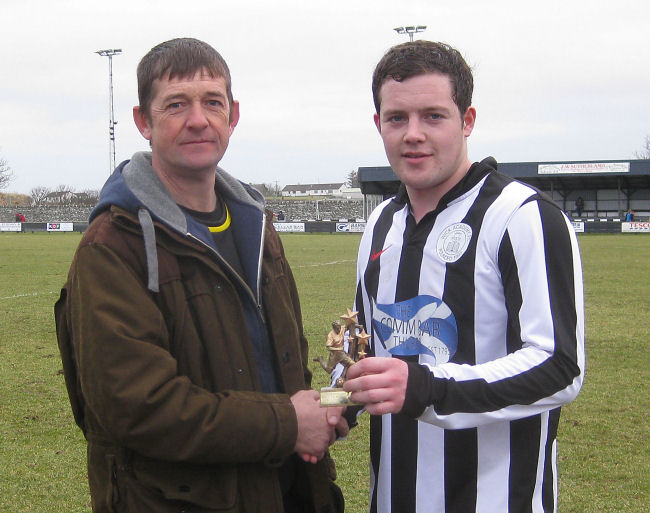