Written by John Briskham on 14 January 2006. Posted in Match Reports

A Martin Gunn hat-trick today helped Academy to their first ever league double win against Brora.

Wick started playing down the Harmsworth slope, but it was Brora who dominated the first 20 minutes of the game.

Their first chance came in the 7th minute. Brora no 9 Mark Kennedy had a shot that deflected for a corner. The corner was whipped in by Conner Campbell and Gordon Mackenzie had a good header that was cleared off the line by Alex Lamb.

In 16 minutes Brora had another chance from yet another Conner Campbell corner that almost dipped directly under Dons cross-bar, with Don having to tip it over the top for another corner. Again from this corner Brora had a chance to test Don, but this time John Smiths shot went high over the bar.

Wick then finally started to get into the game, and in the 21st minute they took the lead. Martin Gunn had a run through the middle of the Brora defence and he played the ball wide to Mark Nichol. Mark returned the pass and it found Martin free in the box and he scored with a good finish low past Michael Gray from about 8 yards out.

In the 26th minute Shane Sutherland had a good run up the left hand side of the Academy defence. He managed to turn past Shaun Sinclair and managed to get a shot on goal, but Don saved comfortably.

Then in the 28th minute Academy doubled their lead. Shaun Sinclair sent in a high cross which Martin Gunn and keeper Gray both went for. Gray looked to have caught the ball, but fumbled and it fell to Martin who slotted home from close range.

Brora battled away though, and pulled a goal back in the 32nd minute. Shane Sutherland again went up the left. Shaun Sinclair had tracked him back, but he cut inside and managed to get a 20 yard shot off onto goal which Don parried out with a good save. The ball came back out to the edge of the Academy box and Sutherland was there again to score low past Don.

Back came Wick and in the 35th minute Mark Nichol had a run down the right and he sent in a low cross which Graeme Reid got on the end off and he scored a really well taken goal shooting past Michael Grays out-stretched left hand.

In the 38th minute Academy had another chance to increase their lead. Mark Nichol squared a ball back to Gary Farquhar about 25 yards from the Brora goal, and Gary had a crack at goal with a powerful shot that went just wide of the left post.

A minute before the half time whistle Martin Gunn got his hat-trick. He was playeyd through the middle of the Brora defence and took the ball forward in his stride before shooting from about 18 yards out into the bottom corner of Grays net.

The second half started quite well for Academy as within the 2nd minute they created another chance. Mark Nichol squared a ball across the Brora defence but Craig Shearer scorched his shot high over the Brora bar.

The Academy fans must have started to wonder when the scoring was going to stop, as first in the 51st minute Graeme Reid had a goal chalked off for off-side, and then 4 minutes later Gary Farquhar played a high ball over the top of the Brora defence onto  Mark Nichol, but Marks shot came back off the Brora post.

Jim Kelly made his first change in the 59th minute taking on Arron Christie for Muir Morton.

2 minutes after this Brora scored what was arguably the best goal of the game. Conner Campbell, who’d been a live-wire for most of the match, was played into the Academy box and he turned and chipped the ball over the head of Andrew Macleod, picked up the dropping ball with good control, and scored a ‘Gazza’ like goal low past Dons left hand.

Game on, and in the 70th minute a Shaun Sinclair cross from the right managed to find the head of Craig Shearer, but Craigs header clipped off the top of the Brora cross-bar.

Graeme Reid was booked in the 71st minute for a late tackle.

With Brora having more and more of the game Don made a change in the 73rd minute, with David Cowie coming on for Gary Farquhar.

Brora then really made the game interesting in the 77th minute when they scored again. Academy gave the ball away in the middle of the park, and it was passed through the heart of the Academy defence to Broras number 9 Mark Kennedy. Don came out to meet him, but Kennedy took the ball around him and scored into the empty net.

Brora tails were really up by this stage, and they were having a real go at the Academy defence. In the 78th minute they could have squared the game when a Shane Sutherland 16 yard shot beat Don but came back off the post.

Kelly made another change in the 78th minute when he took Iain Innes off for Niall Calder.

Brora continue to have the majority of possession, and the last 10 minutes were nerve wracking for the Academy support.

Don took Mark Nichol off in the 85th for Gary Weir, and Gavin Henderson on for Gary Manson in the 89th minute.

Two of the Academy substitutes then sealed the game in the 90th minute. Gary Weir crossed from the right and David Cowie slotted home to send the Academy supporters into raptures.

Referee Wright played a few minutes of injury time, and the game ended with a great roar from the Academy faithful.

The crowd at the Harmsworth today certainly got their moneys worth, in what was an action packed game played hard and fair by both sets of players. Academy didn’t really start until the 20th minute of the game, and Brora certainly had the better of the second half. However it’s goals that count and Academy take all 3 points, and do the league double over their local rivals.
Sponsors Man of the match Martin Gunn
Seen here receiving his award from Match sponsor Harrold Brothers, Owen & Connor Harrold & Johnny Harrold. 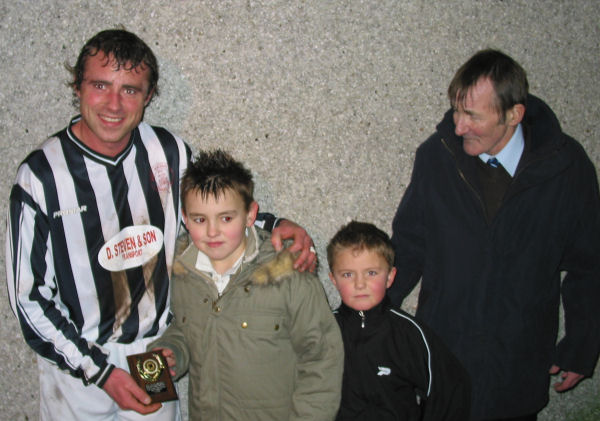