Written by John Briskham on 27 April 2019. Posted in Match Reports

Tom McKenna may not have been overly impressed with Saturday’s victory against Fort William – but looking at the season as a whole he is happy with the progress made by his Wick Academy side. The Scorries rounded off their 2018/19 Highland League campaign with a comfortable 5-1 win at Claggan Park, although they only began to pull clear after their lowly opponents had two players sent off within an eight-minute spell early in the second half.
The result meant McKenna’s men achieved their end-of-season target of seventh in the table – five places higher than last term.
“It was three points and that’s what we wanted,” the manager said.
“At 11 versus 11 there wasn’t much between the teams, to be honest. The sendings off made a big impact and that’s what changed the game.”
It took until the 40th minute for Academy to make the break-through, courtesy of Sam Mackay, and his goal separated the sides at the interval.
Fort’s Jordan Andrew got his marching orders on 55 minutes for a second yellow and the home side were reduced to nine men after 63 minutes when Aiden Taylor was red-carded.
Academy took full advantage with Richard Macadie doubling the lead on 67 minutes before Alan Hughes added a third a minute later.
Davie Allan struck twice, in 81 and 88 minutes, either side of a Panenka-style penalty by Fort’s Scott Hunter.
“I spoke to the lads after the game and thanked for them for their support,” McKenna said. “I came in six months into our first season together and we finished 12th. Now we’ve got seventh, so there is progression there.
“If we can keep progressing then I don’t think we can ask for much more.” 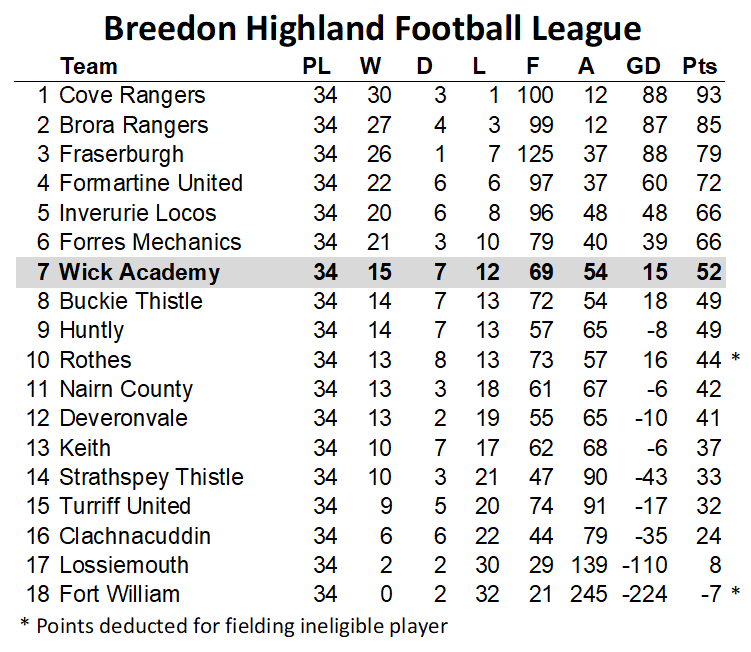