Written by John Briskham on 01 October 2006. Posted in Match Reports

A glorious sunny day at the Harmsworth Park but unfortunately the football wasn’t as bright, with Clach beating Wick by 2 goals to 0.

Clach got off to the best possible start by taking the lead in the 3rd minute. Alex Bone slipped a pass through the middle of the Academy defence and Blair Lawrie took it in his stride and slotted home under the body of More from 8 yards out.

2 minutes later and Clach nearly scored again. Alex Bone got around the side of the Academy defence and More rushed out to try to block his shot. Bone however drilled the ball around James into an empty net, but Andrew MacLeod made a diving header to clear the ball for a corner-kick. From the corner the ball fell to Lawrie on the edge of the box but his shot at goal was well saved by More.

Clach kept the opening pressure on the Wick defence, when in the 7th minute Macuish had another crack at goal that Andrew MacLeod again cleared off the line.

In the 10th minute the Clach live-wire Lawrie picked up an injury and was replaced by Chris Ross.

Academy really struggled to get into the game, with stray passes and a lack of penetration adding to their frustration. It took 23 minutes for them to get their first corner-kick, won from a good run up the right wing by Davie Cowie. Unfortunately the corner didn’t produce anything.

Academy had their first half-sniff at an attempt on goal in the 27th minute. Davie Cowie again made a run up the right wing and he whipped in a good cross. Richard Macadie made good ground into the Clach box and rose to head the ball, but keeper Ridgers just beat him to it and picked the ball off his head with a clean two handed catch.

This spell in the first half was the first that Academy really had in the Clach half, and on the half-hour mark they won another corner. Davie Cowie crossed it in and it was scrambled out to the edge of the box by Gary Black. The ball fell to David Mowat and he made room for himself to get a shot off, but it whistled wide of Ridgers left hand post.

The last action of the half came right on the half-time whistle. Alex Bone had a surging run through the middle of the Academy defence and got a shot on target, but More got down well to his left and got finger-tips to the ball deflecting it for Neil Traill to clear.

Referee Watt blew for half-time on what was a pretty flat first half from Academy, but with only a goal down they were still in the game, and Clash were definitely missing the craft of Lawrie who had been taken off injured.

Academy started the second half with a little more intent, with Davie Cowie having another good run into the Clach half. He managed to get round Steve MacDonald and his cross into the Clach box was blocked by Gary Black to half-hearted claims for hand ball. It would have been a soft penalty if awarded, and referee Watt probably made the correct decision in not giving it.

In the 50th minute the Clach no 8 Chris Anton was booked for pulling on the jersey of Richard Macadie as Richard tried to make progress up the middle of the park.

A minute later Clach looked as if they were going to get another shot on the Academy goal, but David Mowat got a good block in on Gary Ross as he was pulling the trigger to shoot. The ball was cleared up-field and Richard Macadie tested keeper Ridgers with a right foot shot on goal, but Ridgers collected the ball well with another comfortable two handed catch.

Gary Weir had his first real attempt on goal in the 57th minute. Richard Macadie supplied a good cross into the Clach box, and Gary managed to direct a header on goal, but Ridgers was there again to make the save.

With the clock ticking past the hour mark it was Weirs turn to supply Macadie with a flicked on pass. Richard had his back to goal and his overhead bicycle kick flew just over the top of Ridgers cross-bar.

10 minutes later Clachs Chris Ross found himself in almost an identical position that Macadie had, and his overhead kick also went over the top of the Academy cross-bar.

In the 77th minute Clachs Alex Bone had two good chances to double Clachs lead. His first attempt was a shot that forced a goal-mouth scramble and the ball was cleared for a corner. From the corner-kick Bone got a free header and his attempt hit the Academy post, bounced back out, and was cleared to safety by Andrew Macleod.

With about 17 minutes left Peter made a tactical change in an attempt to get something out of the game. He brought on 15 year old Shane Sutherland for Gary Weir, and went 3 at the back.

Unfortunately Clach sealed the game in the 82nd minute. Chris Anton found himself free on the edge of the Academy box. With defenders closing him down it looked as if he missed his chance to get a shot on target, but he squared the ball to David Ross who ran on to it an rifled his shot past a helpless More.

The game fizzled out to an end with Martin Gunn being booked in the 86th minute for holding onto the shirt of David Ross as he tried to pass him in the middle of the park.  Then with almost the last play of the match Alex Bone advanced down the right wing and crossed for Chris Sutherland but his shot went wide of target.

So a disappointing game for Academy, who just didn’t seem to click today with anything they attempted. Clach definitely missed their play-maker Blair Lawrie after had was taken off injured, and if Academy had played better I’m sure they could have taken something out of the game.

Academy slip down to 13th place in the league table, but they have 3 games in hand over the teams around them, so it’s important that they start picking points up in their coming matches. 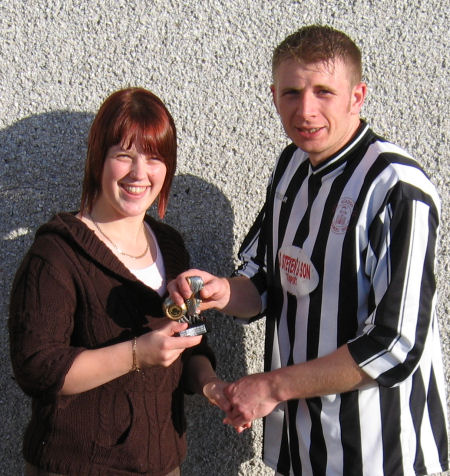