Written by John Briskham on 26 October 2019. Posted in Match Reports

Manager Tom McKenna was dealt a late blow with Davie Allan pulling out of the game this morning due to illness. Sam Mackay, Danny Mackay and Alan Hughes were all unavailable, and with Marc MacGregor, Grant Steven and Ben Sinclair all injured a reshuffled Academy team gave Brora a really good game.

Gary Manson made his 650th competitive appearance for the club, and Craig Gunn clocked up his 100th. Gunn played the game at right-back due to the lack of recognised defenders and won the man of the match award for his performance.

A first half goal from Dale Gillespie just on the half hour was all that separated the sides. Mallin pulled off a great save to deny Gordon MacNab and in the last kick of the ball a Jack Halliday strike came off the post and rolled across the goal line before being cleared.

A minute’s silence was observed prior to kick-off in respect of Academy supporters; Davie Plowman, George Macdonald, Sandy Banks and SFA Head of Referees John Fleming.

Academy were in Brora’s faces from the off with Halliday and Henry in particular hounding down every ball in the middle of the field.

Gordon McNab had Malin on his toes early doors as he turned McNab’s effort over the top of his cross-bar from a good turn and strike from the Academy player.

It was Brora however that opened the scoring. Ally Macdonald squared to Gillespie just outside the box and he picked his spot rifling the ball low into the right-hand corner of McCarthy’s net.

Brora new signing Andrew Macrae poked a shot on target forcing McCarthy to make a block at the bottom of his post.

Up the top end of the park Academy scrapped to win the ball which fell to McNab and he forced Malin to make a diving save palming the ball wide to safety.

Mark Nicolson drove up-field and fed John Pickles wide on the right flank and his chipped floating attempt clipped off the top of the Academy cross-bar.

Down the other end McNab dragged a shot across goal and wide of target.

Into injury time and Academy thought they had the equalizer. Malin came out of his goal for a crossed ball but got nothing on it. It fell onto Halliday’s right peg but his shot rebounded off the post, ran across the line and was hacked to safety by Mark Nicolson.

Man of the match as chosen by match sponsor Subsea7 was Craig Gunn. Craig is pictured receiving his trophy from William Mackay 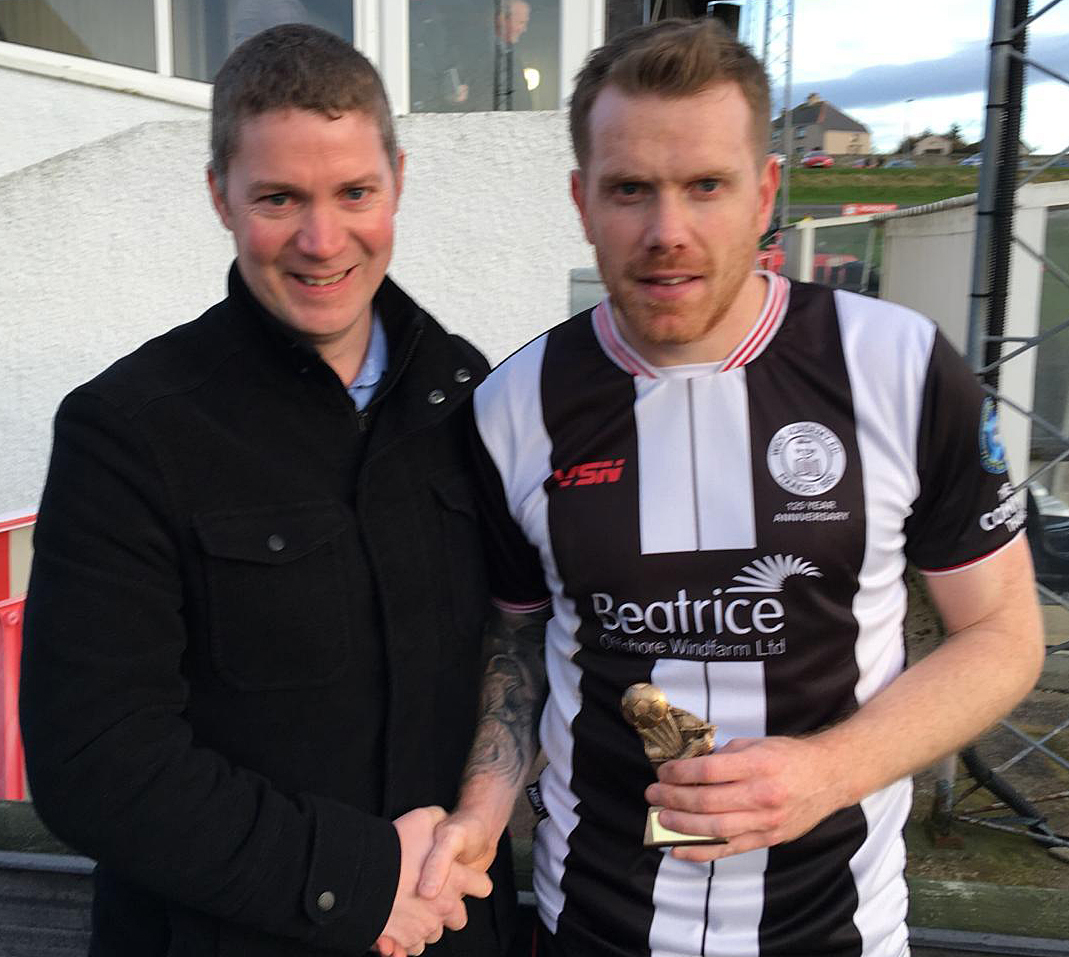