Written by John Briskham on 18 November 2006. Posted in Match Reports

Just kicked off at the Broch on a cold but crisp sunny day. Martin Gunn looks as if he'll be out for a few weeks with an injury he picked up in training last Thursday night, and David Mowat is also unavailable. Good news though is that Alex Lamb is back, after being injured in the game against Cove Rangers on the 9th of September.

Fraserburgh have had the better start, and take the lead in 14 minutes from a free-kick. Number 9 Graham Johnston the scorer.

19 minutes and Academy are level. The goal come from another free-kick. Gary Farquhar floats the ball into the Fraserburgh box and Craig Shearer gets his head to it first to score a well taken goal.

More photos from this Game can be viewed here.
Photographer ATH Ross 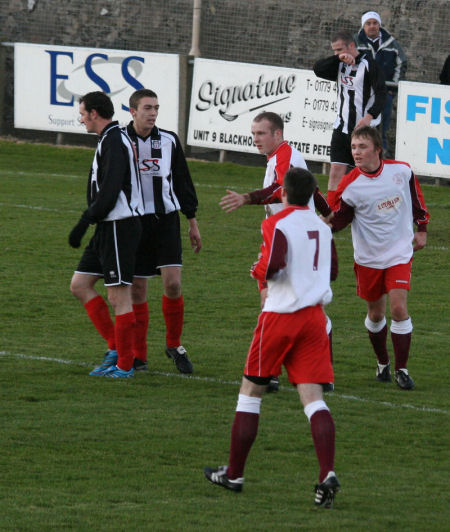 4 minutes later and Academy take the lead, Richard Macadie plays a fantastic ball over the top of the Fraserburgh defence. Gary Manson beats the off-side trap, and slots home past Billy Gordon from the corner of the 6 yard box. 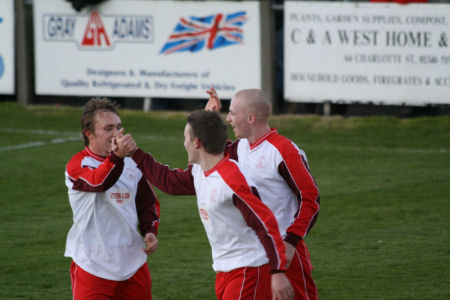 Just over a half hour gone and Fraserburgh pull the game level again. A corner kick is fired into the Academy box and after a real scramble the Fraserburgh defender Derek Milne scores.

4 minutes before half-time and Fraserburgh take the lead for the second time in the game. Another corner and William West takes advantage of slack marking to head home.

15 minutes gone in the second half and no clear goal scoring chances so-far. Both teams are cancelling each other out in mid-field.

20 minutes left and Fraserburgh are pretty much on top. Andrew Macleod is lucky not to get sent off as he takes down a Fraserburgh player on the edge of his own box, and looks to be the last man. Referee Ritchie though only produces the yellow card to the anguish of the Fraserburgh crowd. The resulting Fraserburgh free-kick whistles just inches past Bells right hand post.

Fraserburgh apply the preasure and with two separate attempts hit the bar, and then the post, but Academy manage to hold-out.

Fraserburgh increase their lead in the 75th minute. Another free-kick sees Michael Stephen score, and Fraserburgh look to have sealed all 3 points. 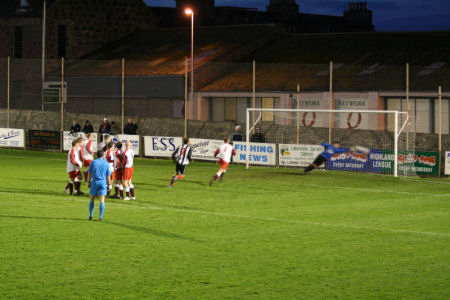 2 minutes later and never-say die Academy come back again. A short corner and the ball is played into the box, and after a real scramble Gary Weir scores with a header to give Adademy a life-line. 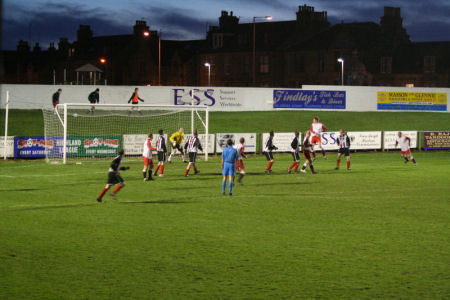 Unfortunately Academy can't muster-up another goal, so for the second time in as many away games we score 3 goals, but don't even get a point for our efforts.

Fort William beat Lossiemouth today 2-1, so that now sinks Academy to the bottom of the league. With Lossiemouth and Fort William both to come in the next 2 games this now makes them both key games that we must look to win.