Written by John Briskham on 27 January 2007. Posted in Match Reports

Not an ideal result for the new Academy management duo of Munro and Hughes, with two second half goals giving Keith the win. But they should be proud in the fact that Academy was probably the better team for the first hour of the game, and gets the plaudits, but unfortunately none of the points.

The Maroons were the first to threaten with 8 minutes gone when David Mowat fouled Darren Still 20 yards from goal. Keith took a quick free-kick, almost catching Academy napping, and Jamie Lennox got his shot on target, but More got down well and made the save.

A minute later Academy had their first attempt, when David Mowat had a crack from 25 yards out, but he pulled his shot just wide of Shearers right hand post.

On the quarter-hour mark Gary Weir and Martin Gunn linked-up well, with Weir playing Gunn into the edge of the Keith box. Gunn hit a crisp right foot shot on target that keeper Shearer could only parry out, and with no-one following in for Academy Neil Robertson had time to clear the danger.

2 minutes later Jonathan Watt pumped a high ball into the Academy box which caused uncertainty in the Wick defence, before Shaun Sinclair got a foot to the ball to make a half-clearance. The ball fell to Still but the thumped it high over the cross-bar.

Academy responded by driving up-field again, David Cowie taking the ball up the right wing, before squaring to Weir. Weir played another neat pass to Gunn, and he fired low towards Shearer’s right post from 30 yards out. The ball took a deflection off a Keith defender and just past the post into the side-netting.

Academy were defending well at this stage, with young Stuart Sinclair growing in stature with every game in the Academy defence, and they were also creating the better scoring chances. Their next attempt came in the 22nd minute. Good hustling mid-field play by Craig Shearer won him the ball, and he set David Cowie off on another run up the right wing. Cowie delivered another good cross which Weir got onto the end off, but he shot high over the top from the edge of the box.

In the 26th minute Keith forced a corner-kick. Jamie McAllister swung the resulting corner into the Academy box and Darren Still rose for a free header, but he couldn’t direct it on target, firing wide of Mores left hand post.

Keith created another dangerous chance in the 37th minute. Jamie Lennox was strong on the ball driving up the Academy wing, and he crossed a wicked ball into the box for Andrew MacLeod to clear with a diving header, which just flashed past Mores left hand post for a corner-kick.

Academy created the final chance of the first half. David Mowat again set things off from the middle of the field by turning the Keith mid-field, and setting Martin Gunn on the charge. Gunn played a super pass into Weir, who hit a powerful right foot shot on goal from 9 yards out, but it flew straight into the safe hands of keeper Shearer.

Wick started the second half in positive fashion, and with only 2 minutes on the clock Martin Gunn set David Cowie off on another run up the wing, driving at the Keith defence. Cowie was forced wide by the Keith defence, but still managed a shot on target from about 30 yards out, but it went straight to keep Shearer’s safe hands.

A minute later Richard Macadie drove at the Keith back-line with the ball at his feet, found room to shoot from the edge of the box, but agonisingly pulled his shot wide of the right post, when he really should have worked the keeper.

Wick hearts were in their mouths in the 55th minute. Cameron Keith pushed down the wing and crossed into the box for Jamie Lennox. Stewart Ross slipped in trying to make a block, but Lennox just failed to make contact with the ball.

2 minutes later and the ball was punted high into the Academy half from a defensive clearance. Andrew MacLeod let it go over his head, and it took a high bounce before keeper More collected, reaching it just before Cameron Keith.

With an hour gone Academy came very close to taking the lead. Martin Gunn started, and so very nearly finished the move. He played the ball to Weir who went wide around the Keith defence, and delivered a perfect cross for Gunn in the middle of the box, but Gunn’s header clipped the top of the Keith cross-bar, with keeper Shearer beaten.

The game then turned in the 65th minute when Keith took the lead. Their move started on the left wing when Andrew MacLeod tried to play the ball out of defence. Good hustling by Jamie McAllister won Keith a throw-in, which was worked to the edge of the Academy box, and with the Wick defence standing off, Jamie Lennox played in Cameron Keith, and he slotted the ball under the body of More.

Keith manager Martin Allan made two changes shortly after they took the lead. Graham Lonie and Richard Craig coming on for Jamie McAllister and Steven King, and it wasn’t long before the subs were involved in the action.

David Mowat conceded a free-kick about 25 yards from goal, and Lonie hit a rocket-shot that flew inches past Mores right hand post. A minute later the other sub Craig was sent through the middle by Still, and with More off his line Craig sent a delicate chip over his head, but the ball hit the top of the Academy cross-bar.

Keith kept pressurising the Academy defence in what was a good period of play for them, and they doubled their lead in the 74th minute. Cameron Keith won the ball and drove up the right wing reaching the by-line before crossing the ball into the heart of the Academy box, and Darren Still fired past a helpless More from 5 yards out.

A flurry of substitutions in the 77th minute saw Dean Donaldson replacing Stuart Walker for Keith, and Gary Farquhar and Mark Makhouli replace Stuart Sinclair and Gary Weir for Wick.

By this stage Keith had their tails up, playing with more confidence, and in the 84th minute Cameron Keith robbed David Mowat of the ball in the middle of the field, and went through on goal, but Stewart Ross tracked back well and got in a solid clearing tackle.

With 4 minutes of the game left Academy came very near to setting up a grand-stand finish. The move started with a Martin Gunn shot being deflected for a corner-kick. The resulting corner caused chaos in the Keith box, as keeper Shearer and the defence failed to clear, and the ball was nearly bundled home before referee MacDonald blew for a free kick, on what can only be assumed as an infringement on the keeper.

In the last attempt of the game substitute Richard Craig chipped the ball over the top of the Academy defence, where Jamie Lennox beat the off-side, but in trying to lob More into an empty net he fired the ball wide.

So Wick having the better of the first hour’s possession, and probably the better of the earlier chances, but the game really turned Keith’s way after their 1st goal. Lots of good performances in the Academy ranks, notably from Stuart Sinclair, Craig Shearer, David Cowie and a returning Martin Gunn, but it’s Keith that take the points and keep their place in the top-half of the table.

Academy stay in 12th place, but Forres manage to open a 3 point gap after their impressive 6 – 0 win at Fort William. Academy still has 3 games in hand over the teams around them, but tough games ahead against Clach, Fraserburgh and Inverurie Locos to follow.

Richard Hughes said after the game “I really felt for the boys after the game, as they gave their all in difficult under-foot conditions. I thought we were the better team for the first hour, and went in at half-time with no negative points written on the note-book. The difference between the two sides was in the finishing, with them taking their chances, and we didn’t”

Hughes was full of phrase for young defender Stuart Sinclair, saying “He’s a perfect example to all the young boys at the club on what they can potentially achieve. There are lots of really good young lads involved in the squad, and the attitude and work-ethic of the entire squad is brilliant just now.”

Hughes agrees that there are tough games coming up, but says “Keith are a top 5 club at the moment and we gave them a good game today. If we can continue with performances like that we shouldn’t fear anyone, and hopefully we can carry this form into the Clach game next week.” 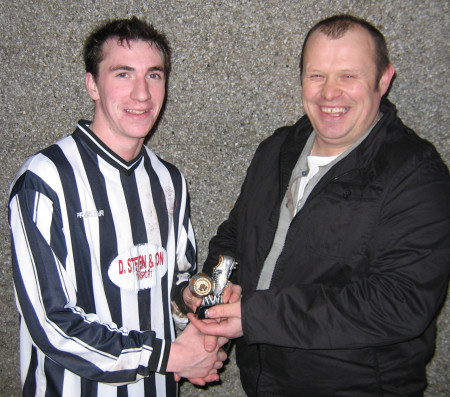