Written by John Briskham on 24 February 2007. Posted in Match Reports

Craig Shearer and David Mowat were both missing from the Academy line-up today, but Gary Farquhar and Shane Sutherland started.

Nairn got the better start to the game and within 4 minutes created their first chance. Martin Sanderson played a great pass into the Academy box for Iain Brooks, but Shaun Sinclair made a good tackle to nick the ball off his toes.

Academy’s first attempt came 2 minutes later. Richard Macadie drove at the Nairn defence and had a shot from 25 yards out that whistled just over the top of Campbell’s cross-bar.

With 20 minutes gone Nairn were having the bulk of possession, and Brian Macleod forced a good save from More after he got free in the box. He fired in a powerful right foot shot which More saved well with his feet.

Nairn were forced to make a change in the 24th minute when Gregg Main picked up an injury and was replaced by Neil MacDonald.

It took 28 minutes for Academy to win their first corner of the game, but unfortunately it didn’t come to much, with Gary Manson failing to clear the first Nairn defender.

Another corner in the 34th minute gave Academy another sniff at goal, this time Stewart Ross sent a flashing header just over the top of the Nairn goal.

Nairn opened the scoring in the 36th minute. Gary Farquhar gave the ball away with a slack pass in mid-field and Ian Brooks picked the ball up between the Academy back-line and slotted home from 12 yards out.

Nairn almost doubled their lead 5 minutes later. Brooks did well up the right wing and squared a good cross to Brian Macleod at the edge of the Academy box, but Macleod blasted his shot high over the cross-bar when he probably should have hit the target.

In the last minute of the half Richard Macadie set Gary Manson up the left wing and Manson sent a dangerous cross into the Nairn box. Shane Sutherland managed to get his head to it in front of Duncan Jones but his header went high.

Academy started the second half with good intent, and inside the 1st minute Richard Macadie drove right through the middle of the Nairn defence and from 9 yards out his shot went straight to keeper Campbell.

Nairn responded by going straight back up-field, Martin Sanderson charging up the right wing and More saved his shot well at his near post.

In the 55th minute Macadie had another chance to work the keeper. Gary Farquhar slotted him through and Richard tried a dink over Campbell, but it just wasn’t high enough and Campbell collected it safely.

Nairn doubled their lead in the 58th minute. Another slack pass, this time by Gary Manson, gifted the ball to David Macrae. James came out to meet him, but he got around him and fired home into an empty net.

With just over an hour gone Tichie and Zeeky made their first change taking Stuart Sinclair on for Gary Weir.

With 67 minutes gone Brian Macleod had a tangle with David Cowie, and Macleod seemed to stick his knee into Cowie in a bit of afters. Referee Wright was on hand and booked Macleod for his actions.

2 minutes later Gary Manson played a neat ball into the Nairn box and Andrew Macleod had a shot on goal that was saved by keeper Campbell.

With 71 minutes played Academy pressed the Nairn defence again, and Martin Gunn made room for himself at the edge of the box and fired a dipping shot which keeper Campbell could only parry out, but unfortunately no-one was following up to take advantage.

2 minutes later John MacAskill was booked for a heavy challenge on Stewart Ross.

Academy made another change in an attempt to get something out of the game in the 78th minute, replacing Shane Sutherland with Bryan Mckiddie.

Nairn sealed the game in the 84th minute. Brooks played David Macrea up the wing and he cut in and went around an advancing More to square for MacAskill and he fired home from 6 yards out.

Academy got a consolation goal in the 90th minute when Richard Macadie fired a 20 + yard right foot rocket past an outstretched Campbell. 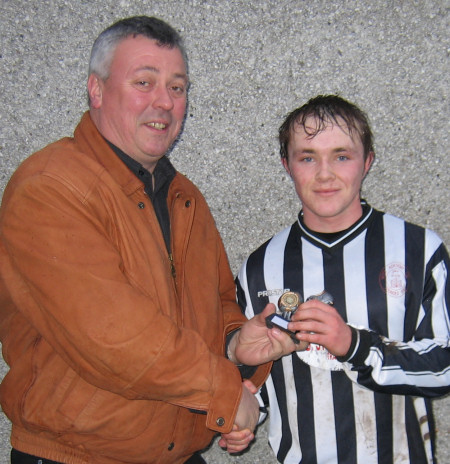