Written by John Briskham on 16 February 2008. Posted in Match Reports

Gary Manson wrote himself into the record-books today by scoring Academy's 500th Highland league goal, as Wick did a demolition job on Fort William chalking up their highest ever league win in the process. Other highlights included a hat-trick for Stewart Ross, and youngster Grant MacNab scoring his first Academy goal.

Academy flew out of the blocks and opened the scoring in the 3rd minute of the game. Richard Macadie drove a low corner into the heart of the Fort box and Craig Shearer slotted home from 4 yards out.

4 minutes later Macadie almost doubled the lead when Coghill dinked the ball over the top of the Fort defence and Macadie went through on goal but pulled his shot just wide of Munros left hand post.

A minute later Ross found himself in a similar position but was denied by a good save from keeper Munro.

Academy were dominating possession and passed up several other good chances with captain Gunn having a shot that looked on target deflected for a corner, and minutes later blasting a 15 yard attempt over the top of the Fort cross-bar.

Fort went down to 10 men just after the quarter-hour mark. Gary Manson breezed past the Fort manager Maclean in a surge for goal and in an attempt to recover Maclean seemed to clip his heels. Referee Frew adjudged Maclean as the last man and showed him a straight red card.

With 19 minutes played Ross did well up the wing and fired in an inch-perfect cross for Macadie who shot straight at keeper Munro.

More was called into action for the first time in the game a minute later as Sean Ellis was played into a good position from a free-kick. He got a sood shot off on target but More was sharp to it and made a good save.

Academy’s 500th league goal came in the 25th minute. Ross got onto the end of a long ball and ran it into in the Fort box. He seemed to take a touch too much and keeper Munro came out to parry the ball, but Manson was on hand to slot home.

Academy could have gone into the break further ahead but failed to capitalise on several other good chances. Coghill stung the hands of keeper Munro with a 20 yard attempt, Munro turning it for a corner. MacLeod headed his attempt from the corner just past the post, and that was followed by further near-misses from Gunn and Macadie forcing another good save from Munro in the last minute of the half.

The second half started as the first ended, with keeper Munro making a double save to deny Manson at the first attempt, and Macadie on the re-bound.

Academy’s third wasn’t long in the coming though as Shearer slid a great pass through the middle of the Fort defence sending Ross clean through on the keeper and he made no mistake tucking the ball past him.

Fort’s best chance of the game fell minutes later. They won a free-kick 25 yards from goal and Martin Kerr bent his attempt over the wall but it smacked off Mores right hand post.

Academy went 4-up with just over hour gone. Coghill battled well to win the ball in mid-field, and sent Alan Sinclair on a charge up the right flank. Sinclair burst through the Fort defence into the box and was taken down by keeper Munro as he attempted to grab the ball from his feet. Ross took the spot-kick and buried it into Munro’s left hand corner.

Academy made their first change with 67 minutes played with young Grant MacNab coming on for Murray Coghill.

The Scorries went nap 4 minutes later. Alan Sinclair crossed into the box and Ross got a head-flick on the ball to send it past an outstretched Munro to claim his hat-trick.

More goals were to follow as Fort heads started to drop. Macadie went on another trade-mark run up the wing before squaring into the box for Shearer and his shot came off the under-side of the cross-bar and bounced behind the goal line.

The clock counted down, but unfortunately for Fort the score kept counting up. Despite the score-line Keeper Munro had a fine game, and continued by denying Macadie then MacNab in a fine double-save before Manson snaffled-up the re-bound to score his second of the game.

With a minute of normal time left Academy went on to notch-up their biggest win since joining the league in season 199495 when substitute MacNab scored his first goal for the Scorries, back-heeling into the net from close range. 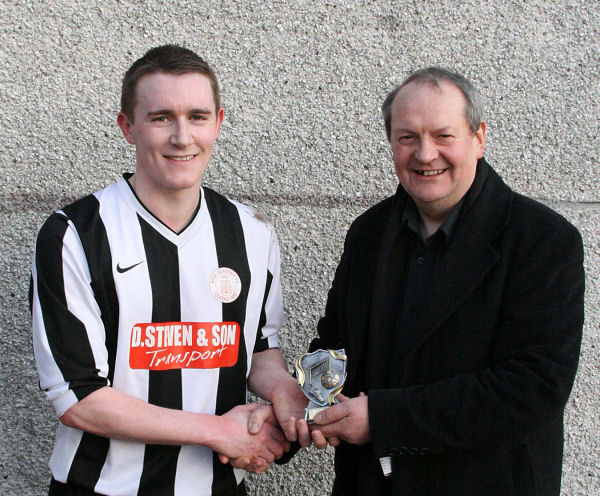