Written by John Briskham on 02 November 2008. Posted in Match Reports

Wick Academy's Scottish Cup dream is over for another season. After fine performances in away ties at Kirkcudbright and Meadowbank, hopes were high when East of Scotland League side Edinburgh City came up to Harmsworth Park on Saturday for a second round replay. Academy played well in spells enjoying a particularly good half an hour between the 20th and 50th minutes. However the Scorries lacked the firepower to shoot down the team from the capital who had the hero of the hour in semi pro Scotland international Robbie Ross. The powerful striker netted a hat trick while his team mate Jordan Hall rubbed salt in Academy's wounds with a fourth in stoppage time. A penalty goal from Gary Weir on the stroke of half time had put Wick right back in the game but City defended stoutly to set up the platform to go on and win the tie.

Academy skipper Martin Gunn won the toss and chose to play down the slope. There was a buzz of excitement among the 500 plus crowd when Gary Manson made a surging run on the left and although tackled managed to work the ball on to Nigel MacKenzie. However as MacKenzie cut into the box and past full back John Hall his final touch sent the ball into the hands of keeper Duncan Monteith.

Dougie Gair threaded the ball up the left touchline to Jordan Hall whose cross into Wick goal mouth was confidently grabbed by keeper Don MacMillan off the head of Robbie Ross. There was another warning of the visitors' intentions and capabilities in the 9th minute when they won their first corner of the game, up on the left, and Drew Calladine hoisted the ball high to the back post where MacMillan again stretched to make a fine catch. The next City raid earned a corner on the right and then a cross from John Hall low in to the 6 yard line was fired over the bar by Ross.

In the 18th minute MacKenzie won Wick's first corner down on the left but Andrew MacLeod's header was blocked on the line and when Gunn won the ball back off Jordan Hall he fired it high over the bar.

Within a minute the Citizens were in front. Jordan Caddow drilled the ball low in from the right and Ross nipped in at the front post to scramble the ball into the bottom corner of the net.

The Scorries fought back and Stevie Cunningham sent over a long cross from the right touchline, though Weir's header was comfortably held by Monteith. The Edinburgh keeper had been in inspired form in the first game and in the 27th minute he showed his class by touching a fiercely struck MacKenzie drive over his crossbar.

Alex Lamb was booked for tripping Ross but was well placed to head away the resultant free kick. Ross MacNamara moved quickly on to the loose ball and from 20 yards tested MacMillan who dived low to his left to save.

When Richard Macadie was floored by a sliding tackle to the right of the box his short free kick was driven high over the bar by Lamb.

Five minutes before the break MacKenzie beat Monteith with a 20 yard lob but the ball drifted just wide of the keeper's left post.

The Wickers were thrown a lifeline in the 45th minute when Michael Bruce pushed Weir in the area. The stocky young striker had to wrestle the ball away from Bruce who was booked and then calmly drove the ball low to Monteith's left while the keeper dived right. Referee Bobby Madden immediately blew for half time but amid angry scenes as the players left the field Monteith too was cautioned.

Academy made a determined start to the second half. MacKenzie ran into the area on the left and slipped the ball to Macadie whose shot brought a fine reaction save from Monteith diving forward and to his left.

Gunn was booked for a late challenge on Ross 40 yards from the Wick goal. From the free kick City had possession down near the 18 yard line but Cunningham made a timely interception.

MacKenzie won a corner on the left which was driven across by Macadie to Weir whose header was headed off the line out to Macadie who fired back in only for John Hall to kick it off the line.

As in the first half City punished Academy with a speedy counter raid. There seemed no real power in the 15 yard shot from Ross but the ball took a wicked deflection off the turf and beat MacMillan at the base of his right post.

Academy still enjoyed plenty of possession but were up against a rugged defence and occasionally contributed to their own downfall when final passes went astray near the box.

MacMillan saved a 15 yard shot from Gair, diving left to push the ball away for a corner. City came back again and although MacLeod succeeded in stroking the ball back towards MacMillan Ross anticipated the move and reacted with the speed of lightning to reach the ball on, tap it forward, skip round the stranded keeper and guide it into the unguarded net.

At 3-1 down midway through the second half Wick faced a real uphill struggle. However Macadie warmed Monteith's hands with a shot from 20 yards.

Gair soon had a chance to kill the game completely but his shot hit the bar and Jordan Hall sliced the rebound over the bar. Gair had a great chance in front of goal but MacLeod blocked the ball on the line and MacMillan snatched it at his left hand post.

In the 75th minute Weir broke free on the right and set up Macadie but the eager attacking midfielder was crowded out. Weir then ran up the middle but John Hall spotted the danger and was on the line to clear Weir's 12 yard effort.

With four minutes plus stoppage time remaining Craig Shearer was denied a goal that might have set up a grandstand finish when he beat Monteith with a well placed lob. The ball bounced down off the underside of the bar, possibly behind the line, but the action had been too fast for south side assistant referee Paul Grant who was 20 yards behind the play.

There was a jubilant Edinburgh celebration in the dying seconds of the game when Steven Clee ran 30 yards through the Wick defence before slipping the ball out to the right to Jordan Hall who curled a beautiful left foot shot from 25 yards low inside the far post to give MacMillan no chance. It was a goal fit to win any game but in truth this game had been won by the hat trick from Ross. So the dream continues for Edinburgh City who will host Second Division leaders Brechin City in round three of the Homecoming Scottish Cup. Meanwhile Academy can only ponder what might have been and will probably rue their missed chances not just in this replay but in the first game too. 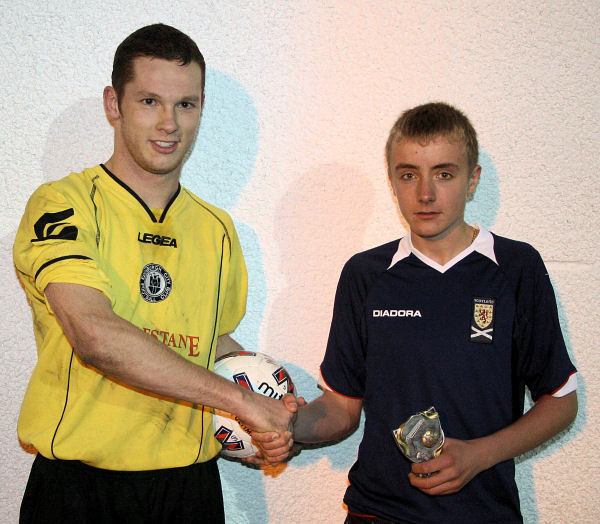 Wick Academy footballers' faces were the picture of dejection as they trooped off the pitch at the end of Saturday's Homecoming Scottish Cup replay at Harmsworth. Their expressions mirrored those of the fans. The Scorries' involvement in the national tournament may have only lasted three games but they had been together many hours, travelling close on 1500 miles and attracting unprecedented interest from the national media. Gareth Law of the Scottish Sun who had become a good friend to players and management alike over the past six weeks, joining in and even instigating some of the practical jokes and his final jape about half an hour before kick off had been to persuade a colleague to phone club secretary Alan Farquhar and pretend to be conducting a live interview on Radio Scotland.

When the players and managers emerged from the changing rooms 20 minutes later the mood was no different but co boss Ian Munro put on a brave face as he faced a barrage of comments and questions from the reporters of some of the national dailies.

"We were happy to go in at half time at 1-1 and Tichie [Richard Hughes] and I said during the break that we believed we could go out in the second half and go on to win the game. I think that it could be said that the best team on the day lost. The breaks went against us. Their first goal just trickled in at the post, the second one took a bobble, the third one we gifted with a bad pass but in and around that period we were playing the better football and creating more chances. We had to change things after the third goal and play with three at the back in the hoping of achieving a wee bit more up front. We had a few efforts cleared off the line. If the shot that came down off the bar had been given that would have put them on the back foot for the last five, and who knows how it might have finished?"

Despite the disappointment of defeat Munro sportingly acknowledged the reality of the situation with his final remarks. "Fair play to Edinburgh, they came up to Wick to do a job and got the result that they wanted. Their striker netted a hat trick and although they were scrappy goals it's putting the ball in the net that counts whatever way they go in. Their fourth goal was a well worked and well taken goal. We are very disappointed but wish them all the best in the next round. But we will be back next year!."

Edinburgh City manager Shaun Steven was a delighted and relieved man. "We were lucky to get a second chance as Wick had deserved to win the previous week at Meadowbank. Their team is of a higher standard than most of the teams we meet in our league and we knew it would be a very hard game and that we would have to be at our very best to stand a chance. We had the luck today and managed to get a few goals. Our second goal was a freakish one. Robbie [striker Ross] sclaffed his shot but the ball must have hit a big divot as the keeper went down to save it and it bobbled over his body. That sort of break gives you the belief that you can go on and win the game. That's how football goes sometimes - you need that wee bit of luck. If you get it, you win but if you don't, you have to go home with a sad face".