Written by John Briskham on 16 November 2008. Posted in Match Reports

Academy climbed two places in the league today with a three goal to nil win over Nairn County.  It's been 10 years since they have managed to beat Nairn by a three goal margin in the league, the last time they manage it was in October 1998 in a 5 2 win at Station Park.

Academy sported their new red and white away strip today and started the game playing up the Harmsworth slope with a strong blustery wind at their backs. The Scorries almost the lead in the 1st minute of play. MacKenzie drove up the left wing and squared a perfect pass for Macadie who was free on the edge of the box. He ran in on goal and as he pulled the trigger with only keeper Donaldson to beat, Neil MacDonald managed to get a toe to the ball and deflected it for a corner.

Narin's first good chance came in the 10th minute when Brian MacLeod fizzed a 20 yard drive inches wide of MacMillan's right hand post. 12 minute later MacKenzie had a similar attempt from 25 yards out, but it too went just wide of target.

2 minutes later and Nairn had two great chances to open the scoring. Martin MacDonald did well down the wing and crossed into the heart of the Academy box. The ball got a flick before landing to Neil MacDonald and his header thumped off the Academy cross-bar and must have landed almost on the line. It came back out for Shaun Kerr and to the relief of the Academy defence he sent his header wide of MacMillan's left hand post.

Nairn were enjoying a good spell at this stage of the game, and Cowie got his timing spot-on as he cleared the ball in the box off the feet of an on-rushing Brian MacLeod.

The last action of the half saw MacMillan make a good low diving save from a Skinner shot, and Macadie at the other end firing a pile-driver shot straight into the arms of keeper Donaldson.

Stewart Ross almost gave Academy the perfect start to the second half, but his headed went agonisingly wide of Donaldson's left hand post.

4 minutes later and MacMillan denied Horne when he got his finger-tips to his shot.

On the hour MacMillan again made a fine save to keep the scores at nil each, again denying Horne by getting his finger-tips to a 30 yarder to tip it over the cross-bar.

In the 73rd minute Macadie went on another surging run up the left wing before cutting inside turning his defender and got a shot on target but the ball went straight to keeper Donaldson who made a comfortable catch.

Academy finally got the opening goal in the 79th minute. Good link-up play between Shearer and McKiddie released MacKenzie up the left wing. He crossed into the Nairn box and the ball evaded everyone before reaching the back post where Macadie had timed his run to perfection and was on hand to slot home.

Six minutes later Academy doubled their lead. This time Macadie turned provider as he laid it on a plate for Weir in the middle of the Nairn box and he made no mistake slotting home from only six yards out.

With only two minutes of the game remaining the Scorries added insult to injury as keeper Donaldson couldn't hold a Macadie shot, and as Cowie tried to turn it in the Nairn substitute Steven Edwards bundled the ball into his own net.

Academy managed to keep the ball for the dying seconds of the game, and now look forward to an away trip to Forres Mechanics next weekend. 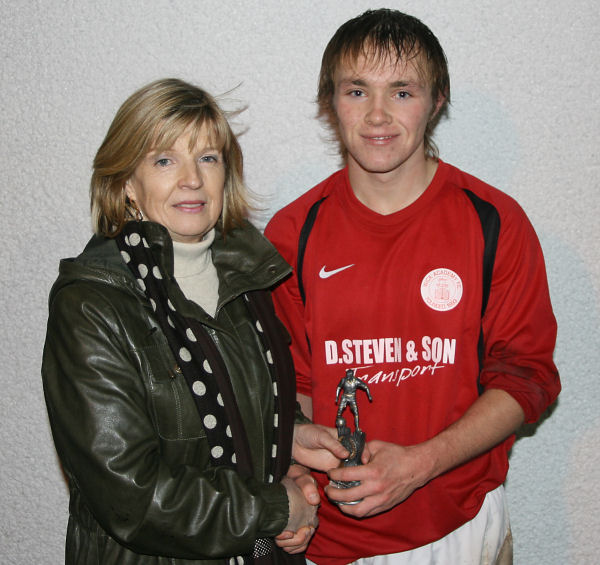