Written by John Briskham on 20 December 2008. Posted in Match Reports

Deveronvale are top of the Christmas tree following a 3-0 win over Academy today. All three of Vales goals came in the second half in a game that Academy didn't really test keeper Blanchard that often.

Vale started the game playing down the Harmsworth slope and were first to threaten in the 4th minute. The ball was whipped in from the left wing and Watt flashed a shot goal-ward but More flung himself at the ball to palm the ball away.

Academy did make some progress into the Vale box in the 9th minute. Good work from Manson and MacKenzie up the wing forced a corner which was swing in by Macadie. The ball fell to Farquhar in the middle of the box but it got trapped under his feet and the Vale defence cleared the danger.

On the quarter hour mark Moore made another great save to deny the Banfers. A high ball was played over the top of Shearer on the right hand corner of the Academy box. Watt got onto the end of it and fired home but More was on hand again to make the stop.

2 minutes later More was called into action yet again as Duncanson drove a shot goal-ward but More stretched a leg out and made a good block turning the ball for a corner.

Academy's first real attempt of the game came in the 21st minute. MacKenzie drove up the left wing and squared to Macadie. He ran in on goal and got a shot off but Allan Stephen got a foot to the ball to make a good block.  The ball fell to Weir who pushed it wide to Cowie, but the retuned cross went just over the top of the Vale cross-bar.

3 minutes later MacKenzie again terrorised the Vale defence up the wing before squaring to Macadie. He slotted to Cowie but he couldn't keep his shot from 22 yards down and it went well over the top of the Vale net.

2 minutes before the break Macadie was played through one on one with Blanchard in a straight race to the ball. Blanchard just got there first and managed to hoof the ball clear for a throw-in.

Vale too the lead 8 minutes after the re-start. A ball in from the left found McGowan who got around Shearer and he squared the ball across goal where Mark Cowie ran in unmarked to slot home from close range into an empty net.

3 minutes later Cowie had another attempt from the left edge of the box but his shot flashed inches wide of Mores right hand post.

Wick won a corner in the 64th minute. Macadie whipped it in and MacLeod got his head to the ball but couldn't direct it on target.

With 66 minutes gone Academy made their first change in an attempt to try to get back it not the game. David Allan coming in for Weir. Vale also took on Coutts for McGowan in the 75th minute and Coutts made an immediate impact as he did well up the left wing before crossing in to the box where the ball fell to Duncanson who rounded Moore and side-footed home.

Manson came close with 4 minutes of the game left as he drove at the Vale defence and unleashed a right-foot pile-driver from 19 yards that looked bound for the top right hand corner, but it swung in the air and shaved the top of the cross-bar.

Vale added the icing to their Christmas cake with seconds left to play. Academy game the ball away cheaply coming out of defence. Substitute Ross played a dangerous pass to McKiddie who was immediately closed down by Noble who nicked the ball and played in Coutts. He composed himself before firing the ball low into the right hand corner of More's net. 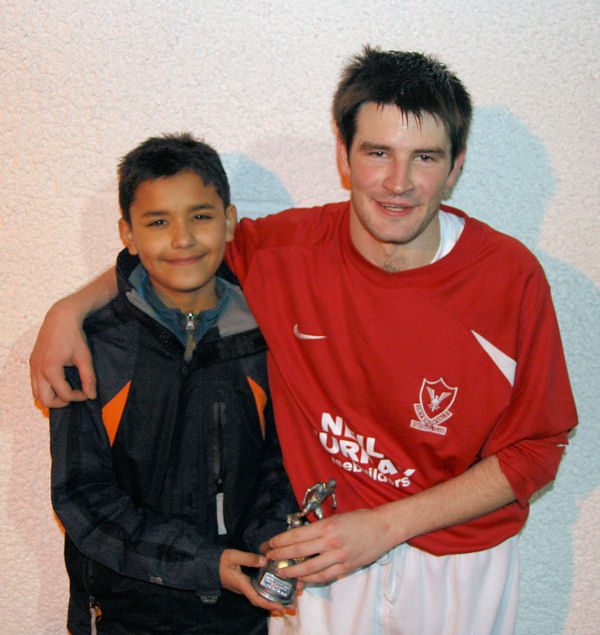