Written by John Briskham on 24 January 2009. Posted in Match Reports

A bright sunny afternoon for Harmsworth Park's first Scot-Ads Highland League game of 2009 but Wick Academy made heavy weather of it before substitute Stevie Cunningham eventually clinched the three points with a couple of exquisite late goals.

Visitors Rothes set out to frustrate Academy's efforts by marshalling as many as nine or ten of their players into a packed defence.

For the first half hour the Wick attacks came mainly down the right with Shaun Sinclair and Davie Cowie linking well to work the ball forward for David Allan who was making his first start after five appearances as a substitute.

Stewart Ross also had the chance to hoist a couple of 40 yard free kicks towards the Rothes goal, the first of which in the 6th minute led to a corner down on the right. Richard Macadie drove the ball across a crowded goal mouth to Gary Weir whose effort eluded keeper Steve Dunn but was scrambled off the line by two defenders.

Twenty minutes into the game Rothes launched their solitary first half raid when Gary Spence crossed from deep on the left away over to Iain McRae who in turn drove the ball low to the six yard line. Wick keeper James More dived to smother it near the feet of Chris Coll and Donald Horsburgh.

Academy responded promptly but Nigel MacKenzie from 30 yards range on the left and Allan from barely 10 yards on the right both shot wide.

The Speysiders' keeper Dunn was not called into action until the 32nd minute when he saved first a 10 yard drive from Weir and then had to dive low to his left to hold a smartly struck 25 yard effort from MacKenzie.

Attacking down the left midfielder MacKenzie saw another drive deflected for a corner and it was beginning to look as though the rugged Rothes rearguard would see it through to half time.

In the 41st minute Craig Shearer moved forward into the visitors' penalty area and turned the ball to his left into the path of Weir. The striker was immediately confronted by a cluster of tangerine shirts and Michael Dunn kicked the ball up towards the halfway line. However Alex Lamb seized quickly on a careless pass and returned the ball to MacKenzie who this time drove the ball low to Dunn's left and into the bottom corner of the net to give Academy the goal they had been so desperately seeking.

Just before the interval Lamb was booked after a late sliding tackle on Michael Smith in the centre circle and Ross had to jump near the penalty spot to head the ball away from the resultant free kick.

A goal behind, Rothes had little option but to adopt a more attacking approach and they enjoyed a good spell for the first ten minutes of the second half. When More leapt among a crowd of players to fist away a McRae free kick he could only deflect it out to his left but Macadie raced after the loose ball and claimed possession near the corner flag. Sinclair stuck out his right leg to block a shot from Coll and also headed away another McRae free kick so that at last Academy could move forward again, Lamb sending MacKenzie up the left to win a corner.

Academy's single goal might well not have been enough but they were gifted a chance to double their lead just after the hour. Weir was up on the Academy left and took the ball inside the box. McRae was behind him and appeared to hold the Wick striker by the shoulder and referee David Watt awarded a penalty. McRae was booked for his lengthy protest and when Weir at last stepped forward to take the spot kick he drove it too close to Dunn who reacted smartly to put his left hand in the way and the ball was scrambled away for a corner. This in turn was cleared when McRae slid in to challenge MacKenzie but with the ball at the far end Mr Watt's attention was drawn to a confrontation between the two players. MacKenzie appeared to have stood on McRae's leg and the referee showed him the red card.

With 10 men against 11 and almost half an hour left the omens were not good for Academy but they still had the upper hand and when Weir slipped a perfect pass into the box, Dunn had to pull off his best save of the match, one on one with Macadie to turn the midfielder's point-blank 10 yard shot round his left post. Dunn then leapt high to claw away Macadie's corner kick. Soon Weir was tripped 21 yards out directly in front of goal but Ross drove the free kick just too high over the top corner of the goal.

Rothes were still dangerous on the break and a 30 yard drive by Steve Sim whistled past the base of More's left hand post.

Managers Ian Munro and Richard Hughes then produced a master stroke of a substitution. Cunningham took over from Cowie so had to run over to the right where he immediately played a one-two with Macadie and from a tight angle drove the ball into the far corner of the net, setting off jubilantly to celebrate his first Highland League goal.

Shearer almost made it three running on to a fine pass from the left by Bryan McKiddie but shooting over the bar.

Within ten minutes Cunningham had scored again. McKiddie split the Rothes defence, threading the ball through the middle and the Lybster youngster reached it just before Dunn to steer it deftly past the keeper into the net.

Cunningham almost had a 15 minute hat trick. Weir lobbed the ball over the Rothes defence and running in from the right the Wick super sub clipped the ball just past the back post.

There was time for Dunn to make yet another save to deny Macadie. Approaching forty years of age and father of centre half Michael, keeper Steve was still as agile as ever at the end of a busy 90 minute shift.

Ironically it was only when down to ten men that Academy displayed much of their hallmark slick passing but the home fans went home happy having seen their heroes score three goals to earn three points. 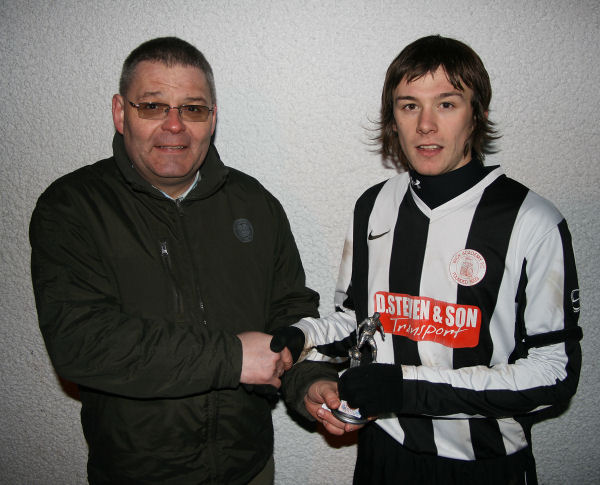