Written by John Briskham on 03 October 2009. Posted in Match Reports

Cup fever hit the Harmsworth Park today and the crowd braved a howling gale and squally showers to witness Academy reach the second round beating Clach 2 -1. Gary Weir was recalled to the squad and got both of Academy's goals, the winner coming with seconds left on the clock. Academy now face an away trip to Girvan on the 24th of October.

As well as Weir getting a recall Bryan Mckiddie also started the game. Stevie Cunningham started this one on the bench and Steven MacDonald missed the game for Clach as he sat out a suspension following last weekend's red card.

Academy opened the scoring with only 3 minutes on the clock. A thrown in from the left was hooked into the box. The Clach defence failed to clear the ball and it bounced through the middle of them before falling to Weir and he smacked the ball home from 6 yards out.

3 minutes later Manson was next to try his luck from 25 yards with a right foot free-kick that keeper Hastie dived to his right to palm clear.

Manson and Macadie did really well pulling defenders out of place and linking up the left wing before Macadie squared the ball to Sam Mackay but his first time attempt went narrowly wide of Hastie's left hand post.

Academy piled on the pressure assisted with the strong back wind and Weir bullied his way into the box and forced Hastie to make a sharp save with his feet turning the ball for a corner.

Clach's first attempt at goal came with 15 minutes played. Mckiddie played a short back pass to Alex Lambs and Gordon Morrison nipped in to steal the ball and tried to chip Alan Bokas but his attempt was too high and went over the cross bar.

The next Academy attack came from a throw in on the right from Grant Campbell that came through to Craig Shearer. He flicked the ball on to David Allan but he fired his attempt over the top of the cross bar from a tight angle.

Duncan Jones for Clach drove forward at every opportunity and won a free kick when he was blocked by Alex Lamb. Jones took the free-kick but he sent his attempt just wide of Bokas's left hand post.

With 5 minutes of the half left Macadie swung in a free kick from the left that shaved the top of Sam Mackay's head as he jumped for the ball. It ran through to the back post where Shearer slid in but he just failed to make contact with the ball with the net beckoning.

With only two minutes of the half left Clach levelled the scores. From a free kick the ball fell for Gordie Morrison on the edge of the box. He controlled the ball before swivelling on it to smack his shot home into the bottom corner of the Academy net.

Clach nearly took the lead with 62 minutes played but Alan Bokas made a great diving save to his right from Michael Finnis who had got his head to a in-swinging free kick.

Academy went back down-field and forced a corned which Macadie took and Gary Weir got in a good header that went just wide of the Clach right hand post.

Clach made a change in the 70th minute taking on the talented Blair Lawrie for Mark Kennedy.

Academy continued to battle against the gale force wind and Weir did well to burst through middle of the Clach back-line and went one on one with the keeper but Hastie made a good save.

Substitute Lawrie started to make a difference to Clach and with 75 minutes played he got in  a good shot from left that Bokas did well to stretch to it and make a save.

Stevie Cunningham came on for David Allan and he sharpened up the Academy attack. With 9 minutes of the game left Craig Shearer was released up right wing where he crossed for Cunningham who made a good run cutting inside to the box but his shot was cleared by the feet of Hastie. The re-bound fell for Cunningham again but he blazed his second attempt over the top of the cross-bar.

With a minute left Shearer slid Weir into the box, he turned his man and got off a right foot shot but it went over the top of the cross-bar.

Just as it looked to be going to extra time Academy grabbed the winner with a great flowing move. Gary Manson drove forward before releasing Richard Macadie. He slid the ball to Alan Farquhar who played it back to Macadie who squared across the goal-line and Weir was on it like a flash to hook home. The Harmsworth Park erupted as Weir celebrated his goal behind the bottom nets with the Academy faithful.

With no time left on the clock referee Mather blew for full time and for the second successive year Academy marched into the second round and face an away trip to Girvan. We have played Girvan, who were Girvan Amateurs at the time, before in the Scottish Cup in 1956 when we beat them 3-1 at the Harmsworth Park. On that day there was two goals from Herbie Lyall and the 3rd from one of our regular supporters Donnie Shearer. Let's hope this is a good omen and we can repeat the result with our next visit.

Sponsors Man of the match Grant Campbell
Pictured receiving his award from Andrew, Michael, and Sarah Mowat on behalf of match sponsor First and Last John O' Groats and the Seaview Hotel 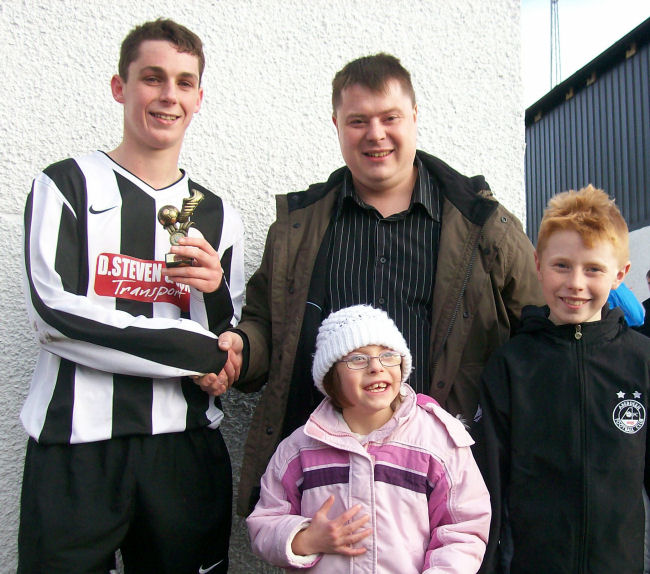