Written by John Briskham on 13 February 2010. Posted in Match Reports

Fort William managed to hold Academy at bay today for 74 minutes before substitute Gary Weir managed to break the deadlock. Martin Gunn and David Allan managed to make the score look a bit more comfortable than it was, both managing to hit the target in fairly quick succession before the full time whistle.

Wick looked to continue their fine form after thrashing Nairn 4-0 mid-week. The Scorries started at a good tempo and within 4 minutes Macadie played Cunningham into the edge of the box but his shot went just wide of target. Fort defender Andrew Martin took a knock whilst trying to block the shot and had to be taken off. He was replaced by Ian Foggo.

Minutes later Academy looked to have a clear penalty when David Alan was clear in the box and looked to have been taken out of play as he was about to pull the trigger, but referee Ross waved the claims from the Academy players aside.

Fort William came close to opening the scoring in the 17th minute when Michael Gillespie got his head to a Martin Kerr free-kick but his looping header clipped off the Academy cross-bar.

8 minutes later Fort were almost in on goal when Richard Finnes broke through the Academy back line but Bokas was sharp off his line and managed to smother the ball at the strikers feet.

Academy broke back up field and won a corner. Macadie whipped it in and Alan Farquhar stormed into the Fort box and got a free header onto the ball but his attempt went high of target.

2 minutes later Sinclair played a great ball through to Macadie and he went one-on-one with keeper Campbell but he blasted his shot high over the top of the cross-bar.

David Allan was next to try his hand, but Darren Quigg deflected his shot just past the post and out for a corner.

In the dying seconds of the half it was Forts turn to have a shout for a penalty kick when Sinclair took Finnes down on the box, but referee Ross again waved the claims aside.

Macadie had a great chance to open the scoring with the final kick of the first half. McKiddie laid the ball off to Macadie at the edge of the box but his shot went just wide of the target.

Keeper Campbell thumped the ball up-field and it broke for Jonathan Hewitt who bore down on goal but Bokas made a good block on his shot and the danger was cleared.

Academy made a change for the start of the second half with McKiddie being replaced for Weir.

Academy started the half with a few good attacks on goal. Cunningham had a header from close range that went straight to keeper Campbell, and Macadie also had an attempt on goal that also flew straight to the Fort keeper.

The Fort keeper was a busy man, and made the save of the match in the 53rd minute. Manson fed the ball to Allan and his shot looked bound for the top right hand corner but Campbell got his finger-tips to the ball with a diving save and tipped it over the cross-bar.

4 minutes later and Campbell was yet again the hero for the Fort as he made another terrific save getting down to his left to tip a Shearer header from a Mackay free-kick around the post.

Fort kept plugging away and Michael Ellis had a chance to open the scoring but his shot went narrowly wide of the target.

Keeper Campbell once again kept the scores to nil when he tipped a Allan chipped shot past his post.

Cunningham crossed the ball for Weir and he headed his attempt over the top of the target and just as it looked as if Academy were fated not to score Weir broke the deadlock. Gunn fired a long cross to the feet of the young striker and he cut into the box and riffled a right foot shot low past keeper Campbell into the corner of his net.

In the next attack Allan hit the bye-line and cut the ball back across the Fort goal-line but Mackay was only inches away from connecting to knock it home.

Allan wrapped the game up 5 minutes from time. He broke through the heart of the Fort defence and marched into the box. Keeper Campbell came to meet him and got a block on the ball, but it wasn't enough to stop it squirming over the goal-line.

Fort had the last attack of the game 2 minutes from time when Martin Kerr fired a free-kick into the Academy box and Sam Urquhart got a free header on the ball but he sent it straight into the arms of Bokas, who kept a clean sheet for the second game on the spin. 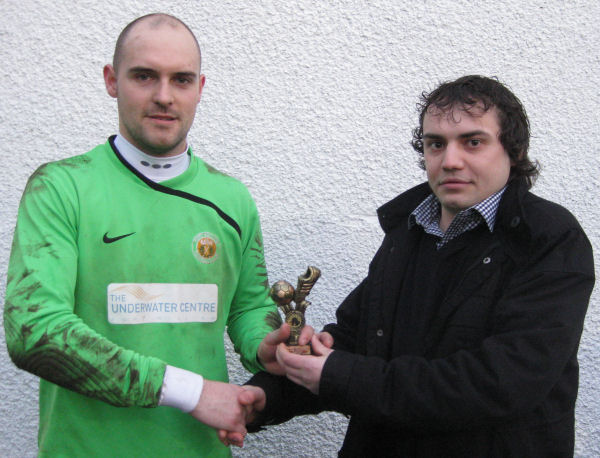