Written by John Briskham on 12 February 2011. Posted in Match Reports

Academy put a dent in Locos title challenge today with a fine 2-1 win. Stevie Cunningham opened the scoring with 17 minutes played. With a strong wind at their backs and playing down-hill the Scorries kept the Locos camped pretty much in their own half for the bulk of the first period. When the Locos did break up-field James More was on hand 3 times to make good first half saves.

Academy doubled their lead with a good flowing move that saw Richard Macadie score his 13th league goal of the season. More had two or three additional wonder saves to keep the Locos at bay before Craig Ross lashed in a cracking strike with only 5 minutes left to set up a gripping final few minutes. Academy however held on and ran out deserving winners.

The first real chance of the first half resulted in Wick Academy taking the lead, Sam Mackay ran towards the Locos defence and played the ball to Richard Macadie, Macadie played it first time to Davie Allan, Allan's low cross was blocked but he fired it back into the mixer, Macadie knocked it down to Stevie Cunningham on the edge of the box he coolly slotted the ball home into the bottom right corner of the goal to give Wick the lead.

On the half hour mark, Inverurie had their first real chance, Clark Bain played in Craig Ross behind the Wick defence and Ross made towards the Wick goal, James More made himself big and managed to convert the ball behind for a corner.

On 41 minutes Locos went close to an equaliser, Adam Maitland crossed from the right and Alan Farquhar headed the ball off the Wick goal line and out wide, Patrick Vigurs managed to hook the ball back in to the danger area, More could only punch the ball into the path of Ross but Ross volleyed high and wide.

Just two minutes later and Locos threatened again, this time the threat came from the left, Maitland this time on the left crossed into the box and the break of the ball fell kindly to Neil Gauld but More was quick to react and make a good smothering save.

With just a minute of the second half gone Wick playing up the slope and into the wind nearly doubled their advantage, Gary Weir played the ball to Macadie who showed a deft touch to let Mackay onto the ball, Mackay sent Allan up the inside right channel and from just inside the box he dragged his shot wide.

Just before the hour mark Gauld turned away from Farquhar on the left edge of the box and his curling shot was beaten away by More.

On 62 minutes Wick doubled their lead, Allan drove in from the left towards goal drawing the keeper, he then squared the ball along the face of goal for Macadie to tap into the empty goal.

Five minutes later and Locos created a good chance, Bain crossed low from the right which More got a good hand to to push the ball away, it fell to Ardivan Djahansouzi and he looked like he had an easy chance to score but Farquhar thought differently throwing himself in front of the ball to knock it behind for a corner.

On 74 minutes it should have been game over, Weir held the ball up in the Locos box and he played it back to Cunningham and he crossed towards the back post where he found the unmarked Mackay, Mackay volleyed the ball into the ground and across the face of goal but the ball went agonizingly wide.

Co manager Kenny Coull was on the field a matter of seconds before he set up a goal for Locos, he skipped a couple of challenges before teeing up Craig Ross and from 22 yards ross curled the ball into the top right hand corner of the net to give Inverurie a consolation. 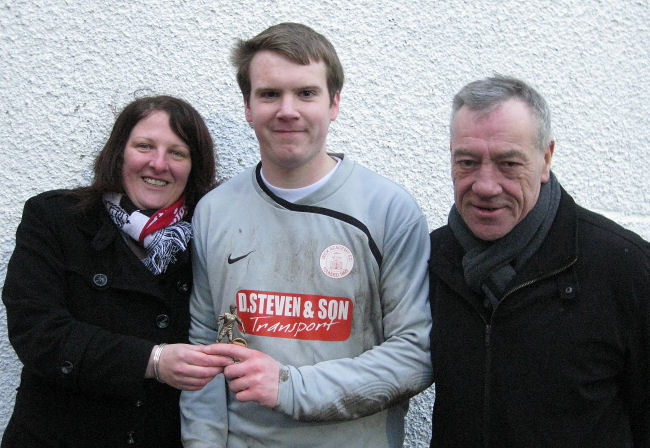