Written by John Briskham on 20 March 2011. Posted in Match Reports

Academy went into today's Cup tie with Gary Manson and David Allan both suspended. Bokas was back between the sticks and Shane Sutherland made the starting line-up.

In a game that was settled by penalties it was Wick who drew first blood on ten minutes, Martin Gunn played a lofted ball over the Keith defence to Sam Mackay who controlled it before hitting the ball into the corner with his left foot from 20 yards.

Academy were dealt a blow on the 20 minute mark when Sam Mackay was taken off with a knock received in a crunching tackle, and he was replaced by Andrew MacLeod.

Keith's first real chance came after 26 minutes, a corner taken by Sean Keith was partially cleared to Wayne Mackay and his lofted ball fell to Derek Nicol but he could not make a clean contact and he fired wide.

Just two minutes later and Wick opened up Keith with a fine passing move, Bryan Mckiddie played into the feet of Stevie Cunningham he worked it onto Richard Macadie who flicked it into the path of Shane Sutherland, Sutherland ran into the box with the ball but his low shot was blocked by the feet of Andy Shearer.

With 37 minutes played Sean Keith worked a short corner to Mackay his driven shot came through a ruck of bodies but was beaten away by Alan Bokas.

With an hour played Keith had a great chance to equalise, Mackay's free kick on the left was missed by everyone and hit the post, the ball came out and hit Jonathan Smith on the head but he could only steer the ball wide of the post from a yard out.

Another injury forced another Academy change. Gary Weir had received a clatter mid-way through the first half that he had been carrying, and he was replaced by Alex Lamb who took a front line role for probably the first time in his career.

On 83 minutes Keith thought they had equalised. Cammy Keith waltzed through the Wick defence but as he hit the ball forward another Keith player went to the ball before Cammy had hit his shot and the linesman flagged for offside. Keith did get their goal two minutes later and it was that man Cammy Keith in one of the few occasions he managed to get away from Alan Farquhar and he showed great predatory instincts to fire the ball across goal and into the bottom corner to send the tie into extra time.

Neither team created much in the first period of extra time with tired legs on both sides taking effect. It took 14 minutes for an attempt on goal. A deep free kick was missed by Alan Bokas and was knocked into a central area to Cammy Keith and you would have put your money on him to score but from four yards he could only hit the bar.

Keith got the breakthrough 3 minutes into the second period of extra time, Bokas got down well to save a shot from Gary Mcnamee but Cammy Keith was on hand to tuck home the rebound and put the Maroons in prime position.

Academy however were having none of it and showed their fighting spirit when just two minutes later Shane Sutherland controlled a low cross into the box and laid it back to Macadie and from just inside the box he curled the ball into the top corner to send the Harmsworth faithful into raptures.

Three minutes later and the Scorries thought they had won it. Macadie played the ball into Alex Lamb and he laid it off to Gunn, Gunn turned away from his man before hitting the post, the ball fell to makeshift striker Lamb but he was stretching and could only fire against the bar.

With not a finger-nail left in the ground referee Lyon blew the whistle for full time and the penalty kicks took centre stage.

The teams shook hands and the drama of spot kicks un-folded. Both keepers made stops from Michael Steven and Cammy Keith. McKiddie and Lennox slotted home the next two efforts and the decisive moment then came when Cunnigham sent his effort down the centre but Andy Shearer spread himself and made a telling block. McAllister scored his effort to put Keith one up, and although Sutherland and Macadie tucked their efforts away Wayne Mackay ended proceedings as he sent Bokas the wrong way and he slotted his effort home safely to start the Keith celebrations.

So the end of Academy's Cup ventures for another season, in a year in both league and cup competitions that we've had many narrow defeats. Keith now go onto face Rothes in the next round, who beat Forres today by a single goal. Academy must now re-focus on taking as many points as possible from the remaining 13 league games. 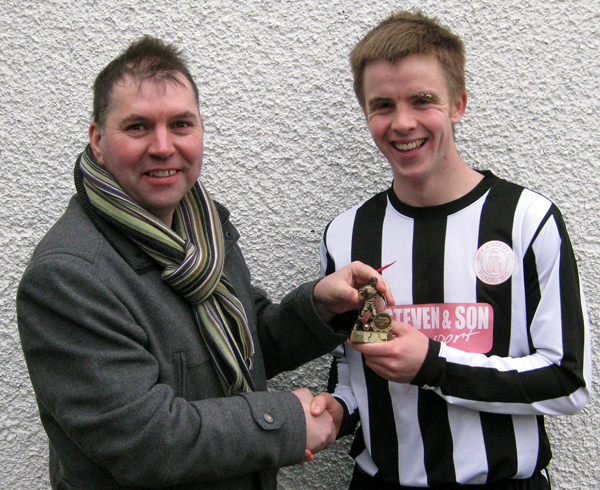