Written by John Briskham on 03 April 2011. Posted in Match Reports

Academy welcomed Clachnacuddin to the Harmsworth Park today and in a game that really failed to catch alight the teams shared the spoils with a 2-2 draw. There was a lot of heavy rain through the night and early morning and the Academy ground-staff did very well to clear the surface water to get the game on. The kick-off was delayed by 15 minutes as a result of the Clach bus breaking down in Brora.

Clach came close to opening the scoring in the 12th minute when Ian Penwright managed to nick a toe to the ball inside the box. The ball looped up and looked goal-bound but Craig Shearer headed clear off the line.

A minute later Shane Sutherland found himself with space in the middle of the Clach box but he could only scuff his shot straight to keeper David Harrison.

The Lilywhites almost capitalised on slack Academy defending with a quarter hour played. Bokas came among a ruck of players to punch away a free kick but didn't get a clean contact on it. It dropped to Penwright who had his back to goal and he tried an overhead kick but it went a yard past the outside of Bokas's left hand post.

The Scorries made the breakthrough in 21 minutes. Mcadie latched onto a through ball and turned on the after-burners to go one-on-one with keeper Harrison. The tall Clach keeper spread himself to try to block Macadie's attempt, but the Macadie kept his nerve and slotted home for his 17th league goal of the campaign.

Clach almost equalised in their next attacking move.  A high ball was punted into the Academy box which was half cleared as far as Mark Dougall. He strolled forward into space and from 25 yards fired a screamer that looked a certain goal, but Bokas went air-born and managed to palm the ball round the post for a corner.

Clach levelled the scores in the 35th minute with a strange type of goal. Sam Urquhart managed to hit the bye-line and crossed into the box. Stuart Leslie managed to get his head to it and sent a looping header towards goal. Bokas scrambled across his line and managed to get a hand to the ball but it had already crossed the line.

Four minutes later Academy regained the lead. The ball was played from midfield by McKiddie into the Clach box. Manson took a great touch to take it under control and knocked it into the path of Davie Allan who smashed it into the back of the net.

Academy made their first change with just over an hour played. Gary Weir came on for Shane Sutherland and Weir's first involvement saw him in the thick of the action as he clipped a shot over the top of the crossbar.

With the park cutting up the remainder of the second half was a pretty flat affair but Clach did managed to mount one good attack which rewarded them with their equaliser.  Bokas made a poor contact with a goal-kick which fell to Sam Urquhart. He drove forward with Clach support in numbers and played the ball into the box. A bit of a melee ensued but Stuart Leslie managed to get a grip of the ball and he made himself a half-yard of space to turn on the ball and poke it home.

Neither team could muster a winner and the game fizzled out to the full time whistle for what was probably a fair result based on the balance of play.

Photographs from the game have been uploaded to the sites media gallery. 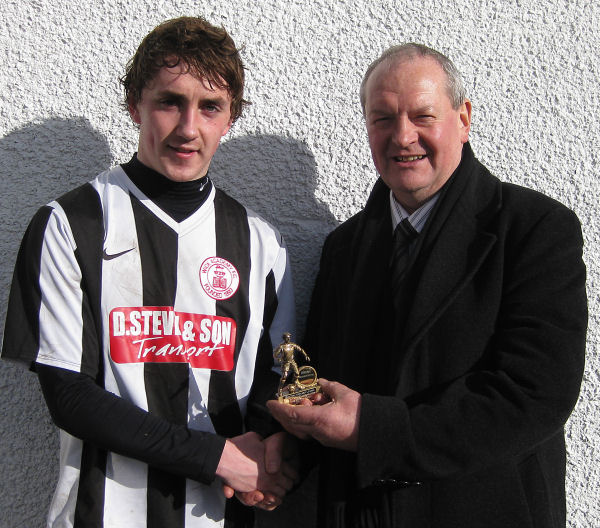