Welcome to the Wick Academy F.C. web site WAFC is Scotland's most northerly senior football club. The team are based…

Support Wick Academy FC by joining the WAFC Premier Club. THE monthly draw where all proceeds go to Wick Academy…

The 2021-22 League fixtures have now been issued. Academy start with an away trip to Forres Mechanics on the 24th July. Our first home game is against Clachnacuddin on the 7th August. We welcome Brechin City to the League for this season and our first game against them is on the 16th October.

We do not yet have any information regarding protocols for spectators or hospitality. That will be published as soon as we know it along with details on how we will deal with match day tickets bought last year and not used, and season tickets. 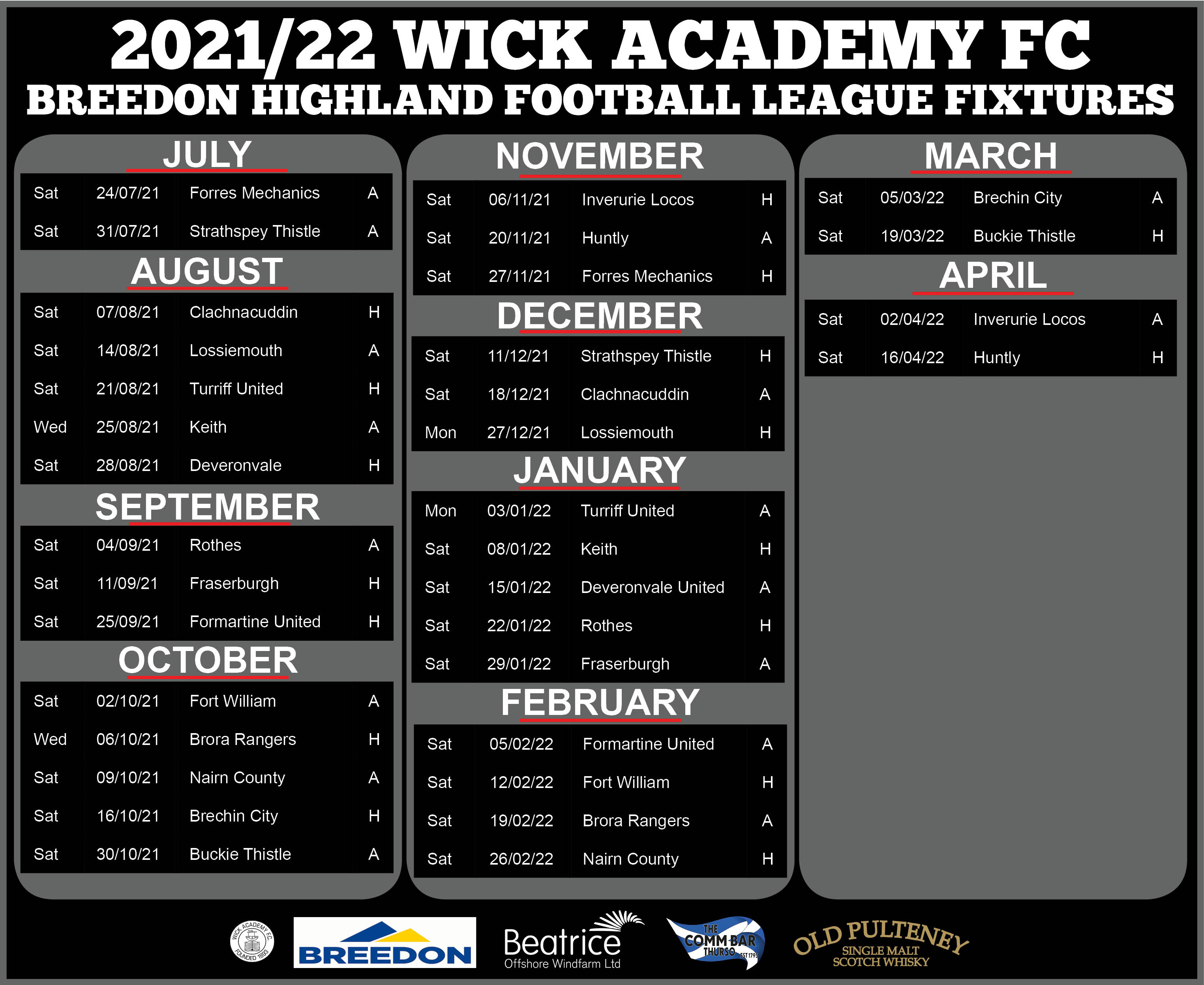 The club are delighted to announce Steven Anderson has agreed a deal which will see him return to the club from 1st June when his current contract with Rothes FC expires.

Steven is well known to the club and it's supporters having spent 4 seasons with us earlier in his career, appearing 151 times and scoring 67 goals.

During his first spell at the club Steven quickly became a fans favourite with his incisive attacking play and was a key member of the North of Scotland cup winning squad back in 2015.

Manager Gary Manson had this to say "I'm really pleased to welcome Steven back to the club. He's a player I know very well and have been keen to get signed up for a while now so I'm delighted its over the line now.

He'll bring a lot good attributes to an already strong squad with his pace, power, eye for goal and versatility. I can't wait to get started now and see how he performs in his 2nd spell here."

Steven will join up with his new team mates for pre season training which starts on the 5th June. 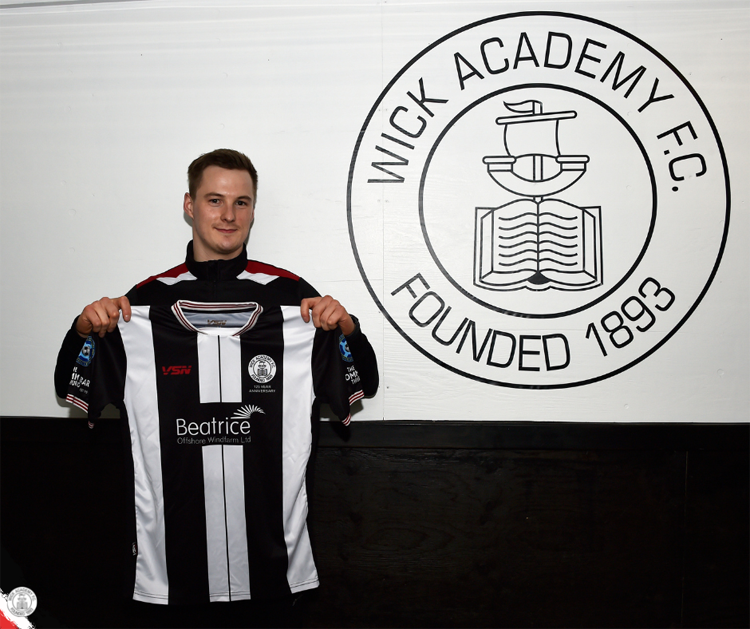 The club can today announce another 4 players signing contract extensions on the back of Saturdays announcement. Sean Campbell, Jack Henry, Jack Halliday and Brandon Sinclair have all committed their long term futures to the club and further strengthen the core of the squad being signed up.

Manager Gary Manson had this to say: "Once again I'm delighted the 4 guys have signed their deals and I can count on them for the next few seasons at least. They are 4 players I know very well and have shown they have what it takes to compete at Highland League level. They are exactly the sort of characters I want to work with as they give their all whether it be training or matches and thats great to have in your squad." 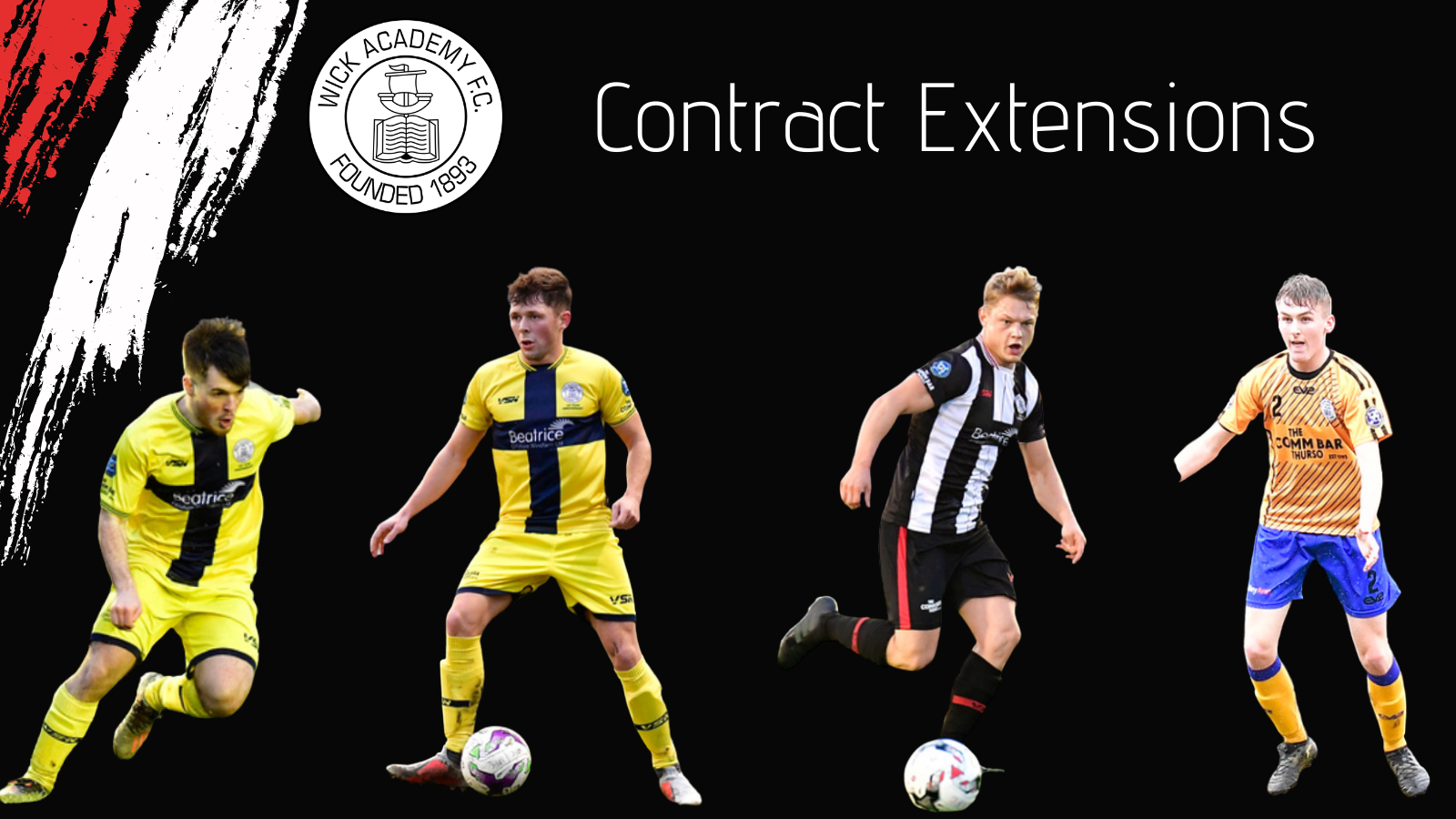 Now that season 2020/21 has been ended the club's attentions are immediately drawn to season 2021/22 and we are delighted to announce that 4 players have committed their immediate futures to the club. Danny Mackay, Alan Farquhar, Mark Macadie and David Allan have all put pen to paper on long term deals which will see them extend their stay with the club.

Manager Gary Manson is delighted to tie the players down:- "It's important to secure the squad for next season early and it's great to be able to announce these 4 players signing contract extensions. It shows they are committed to the club and I'm really pleased in particular to see young Mark Macadie commit to the club long term as he is one we have a lot of hope for in the coming seasons.

The other 3 guys offer invaluable experience and having both the captain and vice-captain sign up is very pleasing." 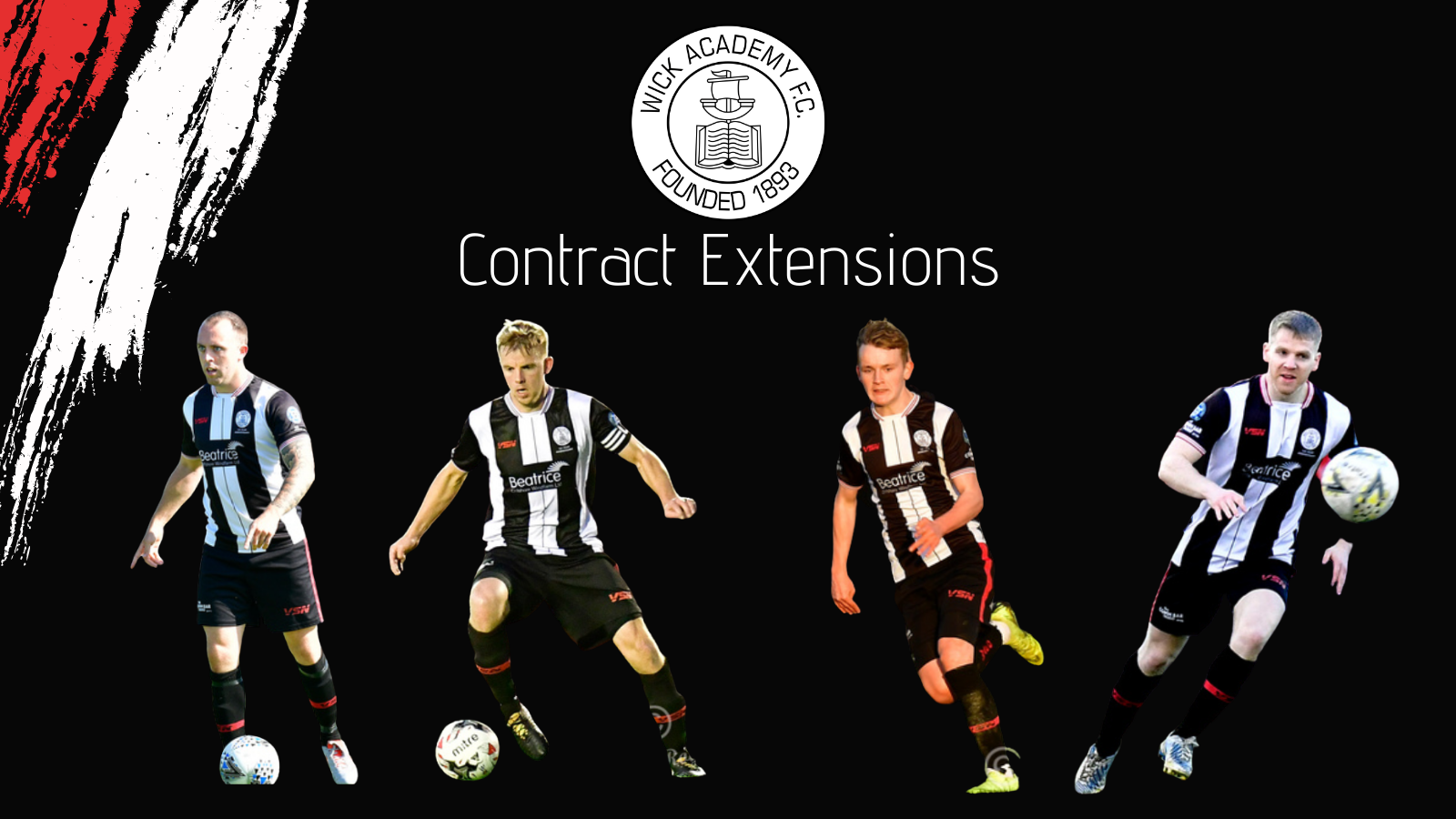 The Highland League League Management Committee met last evening to take stock of season 2020-2021 and the prospects of completing the planned fixture programme.

In view of the circumstances the meeting decided to call a halt to season 2020-2021 because it could not see a viable means to finish it in reasonable time that would allow appropriate preparations for season 2021-2022.  The clear hope is that the new season will provide circumstances that enable a return to more normal activity.

The LMC also decided to honour its obligation to the Scottish Football Pyramid by declaring Brora Rangers FC the champion club for 2020-2021. The statement below provides the background to this decision.

The SHFL is a committed member league of the SFA Pyramid for Scottish Football. This commitment brings with it an obligation to produce a champion club to take part in the annual Pyramid Play-offs and, once the appropriate arrangements are in place at Pyramid Level 6, to ensure that play-offs between Level 5 and Level 6 in the North/North-East of Scotland are established.

The SHFL champion club is determined by points won in championship matches and, given the League Management Committee (LMC) precedent of 21st March 2020, where the season can’t be completed, on a points per game basis. In the event of points being equal, goal difference applies – SHFL rule 8.1.3 refers.

The SHFL LMC has the power to make the decisions on how the champion club is identified – SHFL Rule 4.2.1 refers – ‘The business of the League shall be conducted by the League Management Committee….’.

As a result of the COVID-19 pandemic, LMC standing orders were suspended for the duration of the pandemic by a unanimous vote at the EGM on 21st March 2020. This suspension continues as the pandemic is not yet over.

The 2020-21 season has been shortened severely by pandemic circumstances. The League took great care to hold off beginning the Championship until it could start at a stage at which it was as safe as possible to do so in the communities in which the League is based. This was also for the sake of people involved in the League’s activities – its sense of responsibility to that context is important – and it has been unfortunate that another suspension of play occurred, thereby further truncating the season.

The Scottish Government has allowed the restart of Scottish Leagues 1 and 2, subject to weekly testing of all involved for the remainder of the season. The cost of PCR testing – at an estimated £1,500 per club per week – is beyond the sustainable resources of SHFL clubs for the length of even a shortened League campaign. It should be noted that, from the outset, the League’s top priority has been to seek to ensure that all clubs survived beyond the pandemic.

Strict interpretation of the Pyramid Play-off rules means that the obligation to produce a champion club has to relate to the season in which the play-offs take place. The LMC therefore considered the matter using League rules and decision precedent of a points per game basis, and where necessary, goal difference as its guide.

Consequently, with a decision having been made to call an end to Season 2020-21, the LMC unanimously agreed that Brora Rangers FC should be declared the SHFL Champion Club for Season 2020-21 and be put forward as the SHFL’s nominated club for the SHFL/SLFL/SPFL play-offs.

The league secretary will draw up a refreshed fixtures list with the hope that games will restart sometime in February. This will be subject to a rolling review by the Scottish FA board and the Scottish Government.

All tickets previously sold for Wick Academy January games will still be valid when the fixtures are rearranged.

Any tickets purchased for games played without supporters, can be kept and used next season or can be reimbursed. Details how to reclaim will be posted later.

The health and wellbeing of everyone associated with playing and supporting our game is of vital importance and as such we fully support this decision.

Our league game against Huntly on Saturday the 9th January is postponed. Huntly will be playing in the Scottish Cup that day.

Academy manager Gary Manson said: "The club is delighted to help out a local charities at this time of year. We have donated dozens of toys to the Caithness FM appeal. We hope the donations bring some joy to the children."

Our Scottish Cup match against Musselburgh Athletic on Saturday the 19th December has been postponed. As per SFA protocol there was a pitch inspection today which failed.

The game has been re-scheduled for Monday the 21st December. 7.30pm kick-off.

Match day tickets that have been purchased will remain valid. If you have a ticket and cannot make the re-scheduled date please contact the club and a refund will be organised.

SC - Winner Away To Cowdenbeath

The winner of our Second round preliminary match against Musselburgh Athletic will be away to Scottish League Two Cowdenbeath. That tie is scheduled to be played on Saturday the 26th December.

The full first round draw is as follows: 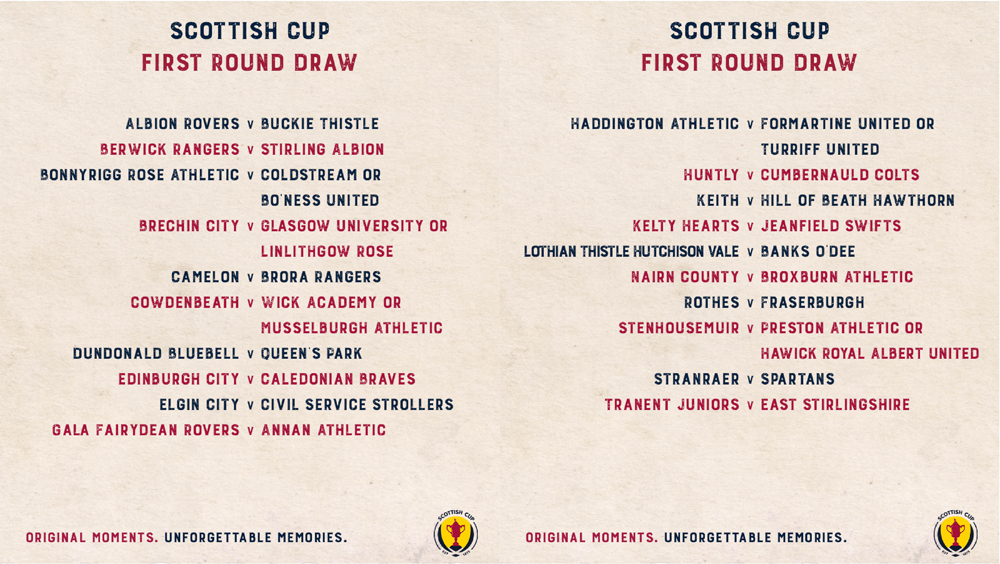