Written by John Briskham on 26 October 2013. Posted in Match Reports 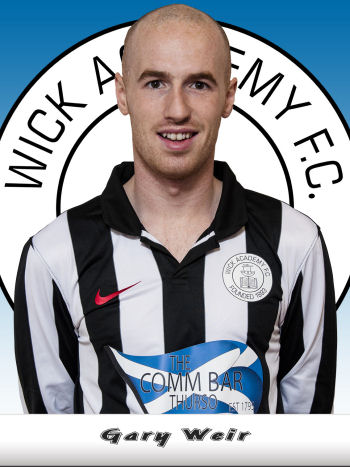 Gary Weir broke the Club record today as he scored all 8 Academy goals in our 8-1 win over visitors Fort William. The previous highest scoring record in a single game was by Richard Macadie who scored 5 in our 7-0 win away to Buckie Thistle in December 2012.

It took 30 minutes before Weir opened the scoring and Academy only held the lead for 4 minutes with Keith Millar firing a dipping shot under James More's cross-bar. From then on though everything that Weir seemed to touch flew in and he was awarded the man of the match award for his brilliant scoring performance.

There was no clue in the first half hour of how this game would pan out. Weir dwelt too long on the ball in the 20th minute and Fort keeper Robbie Donaldson saved.

Gordon McCarroll netted for the visitors after 30 minutes but was flagged offside.

Wick broke quickly up the park and Weir opened the scoring from 12 yards.

Four minutes later Fort equalised when Keith Millar chipped the ball under the bar from 20 yards.

Weir restored the Wick lead in the 37th minute from Davie Allan's cross.

Weir completed his hat-trick two minutes after the break when he was first to the ball from a corner kick.

From then on it was a case of how many Wick and Weir would score.

In the 51st minute a thundering 20 yard effort from Stevie Cunningham bounced down off the bar and Weir followed in and nodded home from 2 yards.

After 57 minutes Weir controlled a cross from Ross Allan and pivoted on the 6 yard line to drill the ball past Donaldson.

James Pickles was taken off injured and was replaced by Sam Mackay just after the hour mark, and it was confirmed later that James has broken a bone in his shoulder which is horrible news for the young Orcadian who has been in fine form.

Weir completed his double hat-trick after 75 minutes with an exquisite left foot free kick which dipped inside the near post.

He completed his tally rounding keeper Donaldson to net from a tight angle after 77 minutes and stroking in another free kick in the final minute, this time low through the wall into the bottom corner of the net.